Right, I'm going to come clean. I live entirely off the state[1]. It's not my fault; I was born into it and I know no other way of life. I'm more to be pitied than scorned. In fact I should be applauded for my selfless sacrifice to the greater good. And I'm just about fed up with all you bloody baby-eating Capitalists looking down at me and my kind. Why? I'll sodding tell you why.

You, who are lucky enough to have jobs, go out to work and enjoy the benefits of companionship, variety and the reward of not only earning a living which makes you feel good in yourself, but also getting to decide how you spend it. Oh how I envy you the right to choose to work overtime if you need some extra cash, because all I can do is to pop out another sprog, or sell some skunk, or deal in counterfeit fags and booze... or flog knocked off gear on eBay, or boot sales, etc... I once resorted to working cash in hand for an afternoon; imagine how wretched that made me feel? Oh, my flesh crawls at the memory,

But in a way we’re in the same boat, you and me; all in this crisis together. You work for uncaring bosses and I am enslaved forever to the cruel yoke of the state, who begrudge me food and shelter... and Sky and Council Tax and Child Benefit and JSA and DLA and free prescriptions and stuff. We should join forces and get them rich bastards who decide how much they pay you, because if we can force them to pay you more, then you can pay more in taxes and I can have more kids. Obviously, it’s better that I have the kids because then they won’t be tempted to go out to work like your lot do feeding the profits of the vicious, nasty, fat cats at the top.

I was offered a job once, but they wanted me in at, like nine o’clock in the morning – every morning, for goodness’ sake. I mean, that’s inhuman! It was even worse for my mate, Paul! And then, after that horror, you hear about those tax cuts for the super-rich. Bastards! Not content with only giving away most of all they earn they want to keep even MORE of their wages for themselves. Selfish, selfish bastards; it’s just not fair. How will we all cope unless they pay our fair share?

I'll give you an example of how difficult it is for us right now. My neighbour recently got a 56” plasma on the insurance payout, after he arranged for me to nick his old 48” off him while he was out at the boozer. But because you nasty bastards didn't give me a sense of propriety or a set of decent values I now find I'm consumed with envy for his new set. But when I nick that one, I bet the fucker just claims for an even bigger one. You can see the trap I'm in. It’s a vicious cycle of deprivation and need [2].

You of course, are not compelled to give in to such cravings, the way I've been programmed, so you'll only get the telly you can afford to buy and you'll learn to be happy with it. You don’t realise just how lucky you are, you unthinking capitalist lackey, you.

And don’t think you can pull a fast one and quit working. Oh no, there's only so much to go around and the benefits ain't for the likes of you, with your dirty capitalist work ethic. Why, we’re doing you a favour LETTING you work and in return we let you keep some of your wages. Those nasty Tories want us to be more like you; you know, standing on our own two feet, contributing to society and all that. Well fuck ‘em. Why would I do that when I already decide what I let you keep? In effect, you work for me! [3] 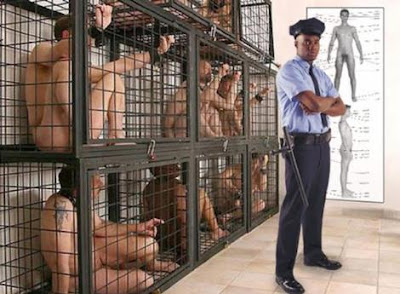 Back to work, bitches!

So, don’t just sit there, I'm feeling all broody and ready to squeeze out another mouth to feed. Look lively; there’s work to be done.

Notes:
1. Fuck off! It's a literary cipher. I'm a rabid, frothing capitalist loon... just like all normal people.
2. I'm still joking; don't hate me
3. I know! They actually bloody think like this!
Posted by Batsby at 08:23