One of the nice things about blogging almost daily is that it’s harder to run out of material than you might think; something always turns up. I’ve been awake since 0400 today. I just couldn’t sleep for fear I had hurt the delicate bloom that is Leftieconomist David Blanchflower. Or, to put it another way, what a great start to the New Year – blocked by another high profile Leftie twonk!

Our little spat – I’m pretty sure he started the spitting – was over a difference in opinion as to what constituted a deserving welfare recipient, with DB happy to toe the party line “From each according to his ability to work his bollocks off  – to each according to his greed.” (I’m pretty sure I’ve got that right) while I prefer to observe the reality that some people will happily sponge off others until they’re stopped.

How can you defend the cost of benefits when headlines like “Benefits rising twice as fast as salaries” appear on such a regular basis? Naturally a sensitive soul like Danny (as he likes to be known on Twitter) will attack the source but it simply cannot be that everything the Daily Mail publishes is intended as a hate piece against the noble Chavs of which Owen Jones speaks so highly (Oh yeah, he’s blocked me too.) in the same way that even The Guardian occasionally publishes something that is less than oleaginous about wind power.

In my experience ‘The Left’ are quick to block. Free speech for all, they say, while rarely extending the privilege to those whose opinions don’t accord with their world view. A man sees what he wants to see and disregards the rest, so I can fully understand the urge and I have blocked a couple of snarling Rottweilers myself, but people like Blanchflower need to win over people like me, otherwise the discussion goes nowhere and blocking is hardly the most effective tactic if he actually welcomes debate.

Just because my actual experience of real people doesn’t match his academic musings doesn’t make my viewpoint any less valid. If he wants to give a voice to those who would live off the state then he must also pay heed to those of us who pay for the state – especially when he himself has pulled off the confidence trick of making a more than decent living by presenting himself as an expert. Much like Owen Jones and ‘Doctor’ Eoin Clarke (Of course he's blocked me!) these experts are effectively talking heads for hire, expounding their views – for fees – but rarely being held accountable for their inaccuracies. Accountable in any meaningful way that is – right or wrong, they still seem to pocket the cash.

Strings of qualifications and public appointments eventually assume their own tenuous credibility but it’s a dodgy expert who actually believes his own publicity and shamans and charlatans abound in the world of money; public or private. You’d think an occasional brush with reality would be welcomed. But financial experts are very much like ultra long range weather forecasters, predicting the outcome for decades ahead when they can’t tell you what next Tuesday will be like. Hang on, let me have a go: it’s going to be wet and cold in winter 2023, then dryer and warmer in the summer. Prove me wrong. 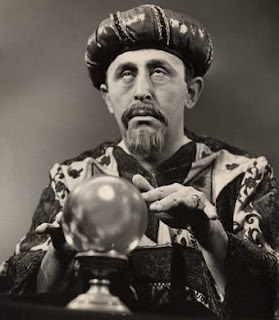 An economist doing what he does best.

So, grow up all you economists and admit you’re only guessing – or do the lefty thing and block away, just like Billy Bragg. Yup, that’s right, blocked by Bragg. I’m gutted.
Posted by Batsby at 08:06