A matter of common sense

When I bought my first house I had to put down a deposit of 50% and the mortgage interest was a whopping 15% per annum, but hey it was bricks and mortar and as anybody would tell you back then there was no finer investment. Owning your own property was one of the ultimate aspirations of the working man, but had been out of the reach of the majority. That was about to change; before long, everybody was at it and the formerly strict rules for borrowing were quickly relaxed.

Aspiration morphed into entitlement and lenders fell over each other to pull ever more risky rabbits from the hat. The earlier lending limits of two-and-a-half times main salary and a sizeable deposit soon became three times joint salary, married or not and later increased to four or even five times and 100%-plus as market values soared. And somewhere in that lot was born the endowment mortgage. Money for nothing. We should have seen the signs.

Every month you only pay off that month’s interest and rely on the endowment portion – no need for you to understand whatever the hell that is - to mature at more than enough to pay off the remaining capital. Hah! Look at those boring idiots being prudent and using repayment mortgages. Hell, we’re off on holiday again, buying a new car, improving our lives and it costs us nothing because it’s property, right? We can keep borrowing against our rising capital value and not only will our endowment pay off the capital debt, there’ll even be a surplus. Bonus!

Except today, people are still trying to get compensation for miss-sold endowment mortgages when the small print was there all along; they have only themselves to blame. Those who prudently stuck with the boring old buy-what-you-can-afford philosophy are slowly paying off that burden. The difference? At the end of the term you own your house outright, while the endowment owners have to borrow still more to make up the shortfall on their expectations.

Sounds familiar? Being in the European Union is like having an endowment mortgage and the slippery snake oil salesman for the project promised us something for nothing.  One of them even said , it can ONLY get better. But nobody ever tells you where this magic ‘better’ is going to come from. It’s like an Ed Miliband ‘policy’, all hollow words and talk of wondrous things in some far off future to conceal the lie that a united Europe is impossible without the costly paper tyranny the unelected in Brussels impose on us all. 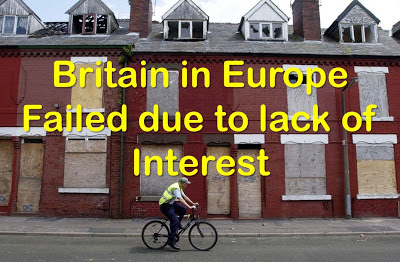 British exit from the EU – Brexit – will be like making the switch to a repayment mortgage. It may cost a little more in the short term but in the end we will actually be the proud possessors of a sovereign country. It was never just a common market. Leaving it is just common sense.
Posted by Batsby at 07:46