The Reason for Treason?

I wasn’t going to write a blog today  - I often don’t at the weekend - but then I found this piece in the Telegraph: Ed Miliband nails his colours to the Euro-mast and says a referendum on Britain’s membership of the European Union is wrong.

He says Labour will always stand up for the national interest.

And his answer to the trouble and strife and socially engineered mischief engendered under Labour’s collusion with the EU is… more Labour and more EU?

“A diverse, multi-ethnic Britain is one of things that makes our country great”, he says. This not long after he admitted Labour got immigration wrong. Just as the miners’ strike devastated Labour's core communities, their version of multiculturalism – monocultural ghettoes – has once again brought blight on their own most steadfast voters. Just how much contempt does labour have for its loyal but confused constituents?

If it were just Labour there would be little to fear. Surely the penny must drop at some point that the left’s pickpocketing ways cannot continue when all the pockets are sewn up? But it’s not just Labour is it? David Cameron may be squirming a little just now, but sure as eggs is eggs he will find a way to renege on his hollow promise to offer a choice. And the whispered referendum pledge by Nick Clegg  just five years ago has also fallen by the wayside.

For forty years I have seen referendums offered and the offers whisked away, replaced by failed negotiations which have always ended up with us further up to our nuts in Europe’s guts. For forty years I have never seen a reasoned justification for ignoring the clear will of that portion of the population who have a strong and informed opinion. What I have seen is Jean Monnet’s plan for a Federal Europe advanced by stealth, year on year. 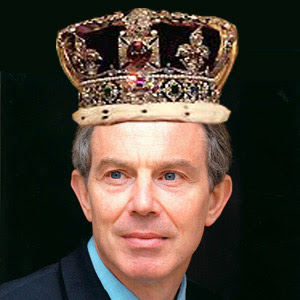 I can't believe anybody voted for this.

We CAN exit the EU. And we CAN do it with little strife and we CAN take control of our own affairs and it WILL bring us greater prosperity and a sense of nation once again. But first we have to take control of our political classes who, it is quite clear, currently have all their strings pulled by Europe.  To be in the pay of a foreign power, working to undermine the true national interest has a name. And until Tony Blair changed the law, it was a hanging offence.
Posted by Batsby at 09:24