The law of unintended consequences decrees that however the government tries to redistribute wealth it will all pretty much end up where it started out. Increase handouts to those evocatively labelled as ‘the most vulnerable in society’ and they will willingly hand it back to those who make fat profits from tobacco, alcohol and gambling. Bribe higher rate taxpayers by giving back some of their tax and they will squirrel it away while finding ways to avoid paying so much in the first place.

It’s all just smoke and mirrors and window dressing to make policies which have zero impact look as if they are bold and imaginative. Yesterday it was Caroline Flint’s turn to pretend that Labour had an answer. Unfortunately, when asked for detail on The Daily Politics, she repeatedly replied that the party was in ‘consultation’ about their already announced plans. This is code for “We have published a policy we think will be popular, but have no idea how we’ll pay for it.” When pressed, her best figure was a miserly £100 per year for the lowest paid.

A packet of fags costs about £8 so Labour’s latest flagship economic miracle might yield about five counterfeit ciggies a week for those most likely to die an early death from lung cancer. I’m assuming the genius here is that by helping them to an earlier grave the savings are made by reducing the overall cost of geriatric care in the future. Meanwhile, George Osborne will be on the Westminster stage this afternoon, trying to make a tax hike look like a gift while selling the next five years of so-called austerity as belt-tightening today for a brighter tomorrow. Somehow all this is achieved by giving away childcare allowances, mostly to those who can do without it.

Beware, they say, of politicians bearing gift horses in the mouth... or something like that. Oh, how we’ll laugh in the future at the folly of our forebears. As we sit huddled round campfires in the eternal blackout of an energy-starved Britain, the troubadours will sing ballads to lift our spirits as we warm our hands. In anticipation of those times I have taken the liberty of rewriting that working class hymn to hard times, Liverpool Lullaby. Please feel free to sing along.


You look so scruffy lying there
Tattooed neck and shaven 'air,
Skunked to fuck you have no care
And we haven’t got a penny.
It's quite a struggle every day
Living on the DLA,
We smoke and drink it all away
We need that childcare bennie.


Although we have no silver spoon,
Better days are coming soon
Now Gideon’s working like a loon
To give us all a pay day.
Perhaps one day we'll buy a scratch,
That wins us load and loads of cash,
We'll all go straight out on the lash
And piss it away by Friday. 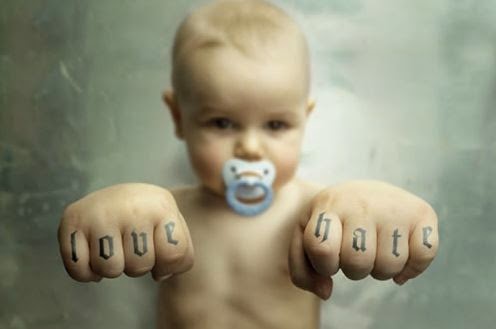 Love? Hate? It's on the state!

Oh you are a lucky kid,
Idle as a dustbin lid.
But it doesn’t matter what you did
We'll gerra bribe from the nanny.
Oh you have your father's brains,
You're both a pair of thick wankstains,
But you bring the dosh that George ordains,
.... Now, gerroff yer face with yer Mammy.

Let's hope everybody gets what they deserve - sod all! Happy Budget Day, everybody!
Posted by Batsby at 07:09