“Ed, we have a problem” Harriet was in one of ‘those’ moods and the temperature round the shadow cabinet table plummeted suddenly as she peered, hawk-like over her reading glasses. Ed, who had been practising his stately look for the televised debates he had just unwittingly signed up to in a two-minute exchange with Nigel Farage on the Andrew Marr show, looked startled.

“But Hattie,” he began

“But, Harriet, he sort of took me by surprise, with his down-to-earth, working-bloke patter. He just doesn’t play by the rules.”

“I’m not talking about Farage, although that is another shit storm you’re walking into, I’m talking about this!” Harriet flung a piece of paper onto the desk. It was covered in crossings out, highlighted sections and scribbled annotations. “What on earth were you thinking?”

Ed glanced at the document. He recognised it immediately “But, but that’s my ten-point contract with the people of Britain! That’s what I, we, believe in, what we stand for!”

”Have you actually read it?” challenged Harriet.

Harriet gave him a withering look, took back the paper and began to read it out loud. The rest of the shadow cabinet variously adopted poses that they thought conveyed the politically correct responses, careful to conceal their real allegiances and their true thoughts. It did not do to have a personal opinion ever since the cosy conservatism of New Labour had been abandoned in favour of a return to the socialist dream. Suddenly, they all looked a lot like a North Korean audience.

“It says here: We will 1.Freeze gas and electricity bills until 2017 and reform the energy market”

“It’s a very popular policy!” blurted out Ed before being silenced with a stare.

“Which has already put people’s fuel bills UP and likely to do so again. And what about number 2.Get 200,000 homes built a year by 2020? Where? How? And in any case that will only just about keep up with the numbers of immigrants coming in to build them.”

Ed was rattled, “Ah, but what about pledge 3.Stop families that rent being ripped off and help them plan for the future with new long term predictable tenancies.”

“Do you actually read the papers at all, Ed? Even our own economists are tearing into you on that. Even David  bloody Blanchflower for fuck’s sake and he’s as red and nutty as they come!” Harriet was getting into her stride “And look at number 4.Cut income tax for hardworking people through a lower 10p starting tax rate, and introduce a 50p top rate of tax as we pay off the deficit in a fair way. Are. You. Mad? First we cut the 10p rate now we bring it back. And everybody knows the 50p rate was a Gordon Brown gimmick, but what on earth were you thinking with ‘hard working people’? That’s the bloody Tory line, you idiot. We’re supposed to be banging on about the squeezed middle!”

“Don’t you ‘yes but’ me you moron. Think about it; hard working people? That suggests that some of them don’t work hard. And what if that perceived split is on racial grounds? Hard working Poles, as opposed to skiving Brits? No wonder Farage had you for breakfast. And what about 9.Tackle the abuse of migrant labour to undercut wages by banning recruitment agencies that only hire foreign workers and pressing for stronger controls in Europe?”

“Yes it is. It’s UKIP’s great popular policy you fool! We just had Barbara Roche orchestrate a great racist smear campaign and now you start talking about ‘foreign workers’? You racist! And anyway, did you not see the massive twatting I got on twitter yesterday over Jeremy bloody Clarkson. We daren’t mention anything about race now, for fear of looking like we’re poking a great steaming turd of a hate debate.” 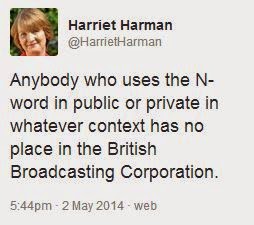 "It turns out that almost nobody actually believes that Clarkson is a venom-spitting Ku Klux Klan flag-bearer and the harder we try and make that stuff stick, the more ridiculous we end up looking."

“But nothing. Ban this, enforce that, magic up jobs out of thin air… cut regulations by what, bringing in even MORE regulations? And how about 6.Make work pay by strengthening the Minimum Wage and providing tax breaks to firms that boost pay through the Living Wage? Be honest, we haven’t a clue what this actually even means.”

“I have been very clear…”

“There you go again. Everybody knows now that when a politician says this it means they have been anything BUT clear and they’re hoping anybody listening will just think they must have got the wrong end of the stick. By the time they’ve figured it out, you’ve already moved on to another policy.”

“But, Harriet, this is our contract with the country. Vote Labour to make Britain better off.”

“If this is all you've got it looks like the country will be a lot better off without Labour.”
Posted by Batsby at 14:16