The Nazis are coming! Oh, it's just the postman...

Right you wise-old-gents, you personable-and-kind-individuals, you daft-and-glorious-operators*, let’s sort out this racism business once and for all; a lot of you seem confused. For a start, given that we refer collectively to the entire population of homo sapiens as ‘the human race’, we’re not talking about antipathy between actual races. We are all of the same species, a fact regularly demonstrated by the remarkable ease with which you lot keep interbreeding. Once upon a time, racism meant actual harmful discrimination against differently hued people, but apparently that’s no longer the case, racism now merging with simple unease to become indistinguishable in the woolly minds of junior thinkers everywhere; the New Racism is ubiquitous and all-pervasive.

I blame Coca Cola – I want to teach the world to sing, all standing hand in hand, my arse! When I was growing up a distrust of foreigners was commonplace, with their funny ways and strange accents. Of course it was – our parents had been warned throughout their lives that walls had ears and loose lips sank ships. Xenophobia was a survival instinct after two world wars in thirty years. But enter the Seventies and the newly-ageing hippy generation were becoming opinion shapers; since then and up to the end of the twentieth century, Britain absorbed the fruits of globalisation and took multiculturalism in its stride. We were becoming quite diverse enough without the ‘help’ of New Labour’s nose-rubbing designs.

To those raised in the poly-lingual streets of inner London – no longer just the British capital but a ‘world city’, whatever that means – the sudden arrival of Eastern Europe may not have been a big deal, but go to rural towns like Boston and see how former cohesive communities have developed a siege mentality, having been (in their not unreasonable estimation) invaded by people they have been unable to easily accommodate and assimilate. Is it any wonder that a weekend poll in that region predicts only one outcome for Thursday’s Euro-elections? Here is a sizeable population of people who feel they are voting for their continued existence, having had no say whatsoever in the socio-political engineering of the last decade.

These people aren’t racists, at worst they are merely fearful and a little angry which, far from being a crime, is a universal instinct and just as with my parents and grandparents is a natural reaction to events. I haven’t heard of any violent protests, there have been no accounts of paint daubed on houses of foreigners and nobody to my knowledge has been driven out of town with burning brands and pitchforks, but to hear the united front of the mainstream media and the old-order political parties you could be forgiven for thinking we were seeing the resurgence of Nazism.

But of course, there HAS been violence. There HAS been bile and vilification. Mobs screaming hatred at the top of their voices have been seen around the land and property has been defaced and vandalised. Bricks have been thrown, banners have been burned and hate-convulsed faces have been thrust at those who campaign for change. And further calls have gone out on social media to mass against the supposed forces of darkness. What an irony then, that all this frightening violence has spewed from those who say they are AGAINST fascism and that they DON’T hate. Once again it is those who say they care that manage to spit out the most venom.

And with every nasty little jibe, every personal attack and every piece of shit despatched by free post suspicions rise in the minds of the politically unsophisticated. Far from the ‘no smoke without fire’ intentions of smear tactics, ordinary people are seeing a wholly different picture. “How is fear, racist?” they ask, and “Why are words being effectively banned? Why are people who voice my concerns being vilified?” Little wonder then, that the penny is belatedly dropping and all of a sudden senior politicians are popping up to claim that the racist charges are over the top... although they continue to use words like despicable and vile in condemning these neo non-racists. 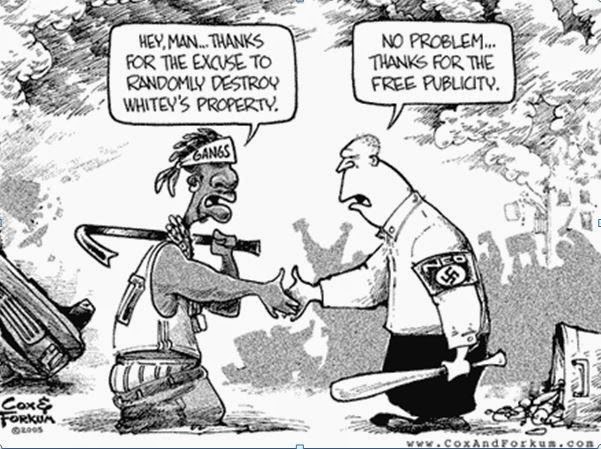 I’ll be glad when Thursday is out of the way and the votes have been counted; when the people who haven’t been intimidated into staying at home make their opinions clear. Of course, it will make no difference, will it? The battleground for next year’s GE will still centre round borders we can’t control, laws we have little influence over, treaties and agreements we can’t veto, employment statistics conjured from thin air by febrile minds and a referendum, the outcome of which has already been decided. Expect a barrage of pro-EU politicking so thick and so fast that even talking of Brexit will become a racist act.