God Save The Queen!

We mean it, man! Ah, 1977 and the Queen’s Silver Jubilee. Her Majesty’s 25 years on the throne were marked by celebrations the Commonwealth over. The sun may have set on the British Empire, but still alive to remember its glory days were many who had been a part of it and been enriched by it and would swear allegiance to a remarkable woman for the rest of their days. She is now the longest serving monarch of this, the last significant monarchy on Earth. Why on earth would she want to trade that for the obscurity that awaits a forlorn and forgotten corner region of the EU?

Of course the Queen wants out of the wretched union – who wouldn’t? - it is a travesty of all that a system of government should be. The palace – after quite a long delay – has registered a complaint with the Independent Press Standards Organisation but several organs have noted that nobody leapt in to outright deny the Sun’s original claim, which they say they stand by. Even Nick Clegg’s response was a feeble “I’m sure I’d remember” but in the media it’s usually the first headline that sticks and besides - nudge nudge, wink-wink, your Maj – we get it.

The monarchy’s days are numbered. Each ‘British European’ generation seems to hold the Queen and all she stands for in less veneration than the last and the strident anti-monarchists steadily grow bolder. Relatively few people wish to see the eccentric Charles on the throne, besides where’s the point in crowning a geriatric – we’re supposed to cheer ‘Long live the king’ after all. But even if the line were to skip quickly to William, few would have the enthusiasm and deep respect for him that they show for Elizabeth.

What better way to carve your name in history forever than to hold the throne of England and its dominions? And what better swansong with which to bow out than to don the helmet and trident of martial Britannia and lead your people to a new freedom? In the disjointed lyrics to the Sex Pistols hit this verse appears, prophetically if completely coincidentally, to hit the nail on the head: 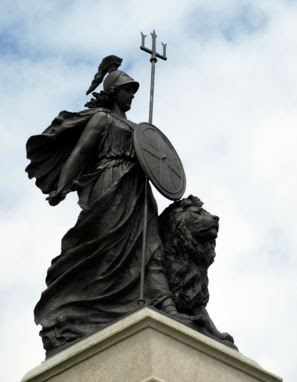 Move over Napoleon, these waves are ours!

At the high tables, learned fools consult volumes of protocol and diplomacy. Over official entertainment they wave their cutlery and recite texts and edicts and quote precedents. Far from the madding crowd of the living, breathing millions whose vote may well be decided by such slender arguments as ‘it’s what the Queen wants’, politicians decide what the Queen ought to want. And the matter is bound to crop up on Question Time tonight. But whatever the commentators say, in this madding crowd there is a massive popular longing for the Queen to be queen to the end and say no to the EU. We mean it, ma’am.
Posted by Batsby at 05:16