Some stuff has been agreed about HS2, but unless you are directly affected you won’t really care. Obviously if you have recently bought a new house in Sheffield, or you have spent forty-plus years farming a certain acreage of land, the effects of the declared route will be potentially devastating but hey, people survive earthquakes, floods, overwhelming forest fires and so on, so you are expected to take it on the chin, relocate and carry on.

But apart from the relatively few, sitting where the tracks may one day be, the only cost is the headline capital expenditure. Of course the projected £55billion might be better spent elsewhere; it could pay off the laughable Brexit ‘divorce bill’, or it could quiet the public service unions for a couple of weeks, or it could even help to mollify Nicola Spudgun’s incessant whining, although that is entirely debateable; she seems to exist to complain.

But of course it won’t be; that is the project won’t, as it were, be derailed over current spending concerns because this is ‘investment’ and therefore good spending. At least it is touted that way. It will bring inestimable benefits, they say. But to whom? Yes, there will be employment, but how much of that will go to foreign contractors, or taken on by migrant workers? How much of the huge sum of wages will find itself not invested locally but sent abroad?

It is scarcely creditable that a golden opportunity to train up our own will be missed – over the course of the project a whole generation of new civil engineers, project managers, construction workers and on and on, could be built up – but missed it will be. Too hard, they will say, to try and convert the recalcitrant, idle British from welfare to work. Too easy, they will discover, to go for the short-term cheaper option. And this is the great tragedy of the British state.

Is it a lack of confidence in our own? Is it kow-towing to Brussels and free movement? Is it, genuinely, a bizarre commitment to diversity at any cost? This apparent abandonment of all the things we used to be good at is part of the despair that my generation feels when they look at how our country is turning out. And in part it might explain some of the attraction of Jeremy Corbyn, who talks the talk of Britishness while at the same time condoning an economic ideology that would prove ruinous.

The tangible direct benefits of a finished HS2 are nebulous. In the decades it will take to complete, the aims set out some decades ago will be half a century out of date by the time they come to fruition. Nobody with any experience of human caprice claims that degree of prescience. But the potential benefits of putting the British first during the period of investment will be lost in our inability to discriminate in their favour. If we don’t start to right the wrongs of the last twenty years, very soon there will be no point. 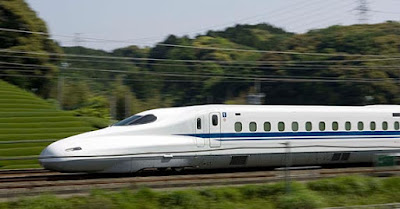 That £55billion (but of course it will really be many times that amount) could go to buy 350 of the new £150million-a-pop fighters, or half that number and the platforms to carry them. Or it could be used to build hospitals, schools, or reintroduce actual policing. It could even be put towards reversing the sudden declining life expectancy... or curing cancer. But it won’t be, will it? Like every other national ‘investment’ opportunity, it will be misspent, misappropriated and basically pissed up the wall until the day they abandon it, unfinished, five times over budget and twenty years too late.
Posted by Batsby at 07:38

Email ThisBlogThis!Share to TwitterShare to FacebookShare to Pinterest
Labels: HS2, investment in infrastructure