We Need to Talk about Kevin... Again

The Victorians had it right; children should be seen but not heard. In fact they should only even be seen when they are doing something amusing or amazing. If they’re not falling over, bumping into things, or recalling Pi to a thousand decimal places, silently, children are a bloody liability. Parents should nurture them, teachers should fill them with curiosity and various mentors should inspire and encourage them. But for Pete’s sake, shut them the fuck up.

While watching something last night, on a streaming channel which doesn’t allow you to fast-forward through commercials, I had the misfortune to endure the excruciating Amazon climate change pledge excrescence. One after another, whiny brats from around the world admonished me for threatening their future, blamed me for ignoring what was so clear to their all-prescient sensibilities and charged me with fixing it all. For them, presumably.

Well, that can sod off; I am not going to be blackmailed by a bunch of snotty sprogs. My generation grew up in a world where recycling was normal. We didn’t throw things away when they broke; we fixed them, or salvaged what we could for parts. Food was rarely, if ever, thrown away, and we didn’t expect it to come in bomb-proof plastic enclosures with no alternative use, and – I’m talking to you, Amazon – we would have been embarrassed about sending somebody a toothbrush in a box big enough to house a small yak.

We didn’t roam the streets clutching yet another coffee-to-go, or a single-use plastic bottle on every mission into the deepest, darkest high street. Fizzy drinks were a treat, not a necessity. We didn’t expect our every demand to be met, and deferred gratification was the norm. Before credit cards we knew we had to save up for something we wanted. And when the time came to part with that money we often realised the original desire had waned, and we had a better use for the cash.

Parsimony was normal, choices had to be made and compromises reached. Yes, air travel and yes, personal transport; for many these were the rewards of middle and older age when, after a lifetime of toil we had finally made our nests comfortable. And just as we had endured relative hardship in earlier years, we have the necessary stoicism to set aside our luxuries with few complaints. We are products of our age, as are the next generation. But just look how the next lot is turning out.

Remember that children know nothing but what they have been told. Children didn’t make that maudlin Amazon tripe. They didn’t write the words; they didn’t research their thesis. They just regurgitated what others dictated to them. Who are these others? They are the influencers; a shadowy and ever-present horde of mostly millennials who have decided that their parents and their grandparents are to blame. For everything. In other words, just older children who have depended on real adults all their life, but imagine in their immaturity that they are the grown-ups now.

These complainants are not the solution – in fact it appears they are taking no responsibility at all, insisting that the people they blame must do all the heavy lifting; they are like the BLM crowd, with no sense that they are participants, but insist on being the recipients of reparation. Be the change? They have no intention of being the change; they think that berating others is the same thing as actually doing something. Like think-tank politicians, they believe slogans are the same as action. 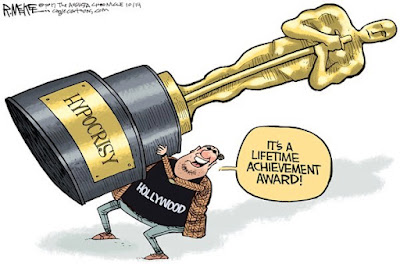 It’s as if the lessons of the last few years have never sunk in. Instead of asking why people voted for Brexit and Trump they just label them as stupid. Instead of asking how the various groups can collaborate to tackle the issues of the day, they act, childishly, as if the fault is always that of the others. The up-and-coming generation have no knowledge of their own, but they just don’t realise it. Children are the future? My arse. But in a sense they may have a point. Adults did this, so adults need to fix this. No, not the climate, the bloody kids.

Email ThisBlogThis!Share to TwitterShare to FacebookShare to Pinterest
Labels: Amazon climate pledge, children are not the future, Climate change