Sadly, politicians and all of their advisers, are rubbish when it comes to mantras. And in choosing to mimic Blair’s 'education' trifecta, which policy resulted in ever-dumbed down, largely worthless McQualifications, Truss has gifted the opposition with open goals galore. Growth in poverty, foodbanks, waste, exploitation, illegal immigration and anxiety are merely the first six examples that sprang to mind.

In trying to encourage business to grow, a plentiful supply of cheap labour will be needed, and we all know where that is coming from. As mortgage rates grow, people formerly in merely dire straits will have to tighten the belt still further and consumption will be affected. Consumption – there’s another one; all these undocumented incomers have brought tuberculosis back into the national medical frame where it is and will continue to be a growing problem.

As queues for medical attention grow, so too will the gaping maw of the NHS budget. Graduates of soft courses in the social arena will continue to stuff the unemployable categories of grievance mongers, critical race theory advocates and the enemies of common sense everywhere. Our ‘not-zero’ climate policy will grow the output of CO2 into the atmosphere as outfits like Drax use the ‘burning biomass isn’t counted’ loophole, spending £billions in the bargain to assist in the deforestation of primary forests in British Columbia.

As anybody studying the effects of bureaucracy over the centuries will know, growth does not automatically translate into wealth. Grow the government tax-take, grow the civil service, grow the NGOs funded by the devious diversion of funding into the money-pits they represent. Trickle-down economics? The problem is where it all trickles to. In every area of government intervention the markets find a way of sucking up potential and turning it into waste.

But what’s the alternative? Astute parents should advise those of their offspring unsuited to the rigours of engineering and science to opt for one of the more nebulous of disciplines which, while having no useful purpose n the world nevertheless increases one’s opportunity to acquire personal wealth. The growth in anxiety and its drop-of-a-hat diagnosis will surely lead to a demand for more therapists. And the growth in the number of things you can supposedly be treated for will expand the field still further. 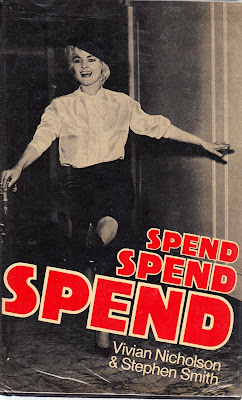 Growth in manufacturing? No way – we need to export all these real jobs to developing nations. What we need is growth in spending. Get out to the shops, splash the cash, acquire like there’s no tomorrow (There probably isn’t, economically). Perhaps I was wrong and Liz Truss didn’t borrow from Blair. Maybe she took her cue from Viv Nicholson and is really exhorting us all to “spend, spend, spend”.