Careful with that axe, Eugene

Adam Rutherford, the BBC’s favourite geneticist, currently has a series on Radio Four – Bad Blood – about the evils of eugenics. So popular was it at one time that parents in 1920s USA appropriated the term itself to name their children. Then along came Hitler and the practice fell out of favour. But, come on, is the notion all that bad, really? We can’t be unique amongst all species that humanity cannot be improved upon by a bit of selective breeding.

And of course, the wealthy very much do breed selectively, and for the same reasons. Why would you not want to improve your bloodline? Did not wealthy families engage in arranged marriages to exactly that end? Do not companies partner with other agencies to improve their chances of success and longevity? Did the west not ban sibling marriage because of the negative effects on genetics? And surely the multicultural dream of New Labour is an exercise [largely failed] in human engineering on a massive scale?

But no, the use of the word eugenics today is much like the use of the word racism. It is an instant put-down to those who dare to suppose that the human race could do better. And while we might not know the ultimate recipe for success, few among us will have never harboured the opinion that certain people should be discouraged from breeding. But try to set out an argument for ‘better’ management of our human stock and you will be backed into a corner by accusations of being a eugenicist.

Our prisons are crowded and had we still mental asylums they would be overflowing, except all of their potential inmates are out on the streets in plain view. The slums are back, teeming with human detritus with little in the way of prospects, and as our refusal to tackle the monster of uneven population growth grows more stubborn, the problem grows with it.

Our lower orders – for there really are such things – are idle, displaced in the labour market by people with whom we share little in the way of common bonds or culture. Our entire country is flooded with unproductive drones at a time when we are being told that the demand for low-skilled labour is diminishing, yet can’t be met by our own. And isn’t this entire exercise itself a form of national eugenics, replacing our actual indigenous population with a different breeding stock? It is little wonder that better off native born Brits are deciding, whether for financial or societal reasons, to limit their families. 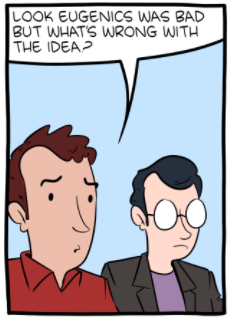 The government’s response? Cuts everywhere. In infrastructure, in health and social care, in policing, in education, in energy security. The list goes on but one thing is for certain, it is not getting better for any but a select few. The country is unrecognisable from only a few decades ago, maybe even just two decades ago. The one thing which is not being cut is immigration. If the axe is to fall anywhere it really ought to be used to split apart all the false arguments used to silence us. Cut the crap and let us have those verboten debates, or else watch the whole thing fall further into disarray and dismemberment.