So, earlier today I received an unsolicited tweet from a cyclist. I’d followed him because, well, he’s a cyclist and i own a bike or three. I don’t recall actually having any form of intercourse with him, but I’d read his blog and all that good Twitter community stuff you do and I’m not certain, but the fact that he replied to me kind of implies that he must have followed me back, at least for a while.

Well, I’ve been having a touch of the Twitterbugs of late and noticed that, quite frequently, I appear to have ‘unfollowed’ somebody without any intent on my part and I know that others have experienced the same thing. It’s a recognised issue with the site and leads to much furrowing of brows and wringing of hands. Followers are a bit like pets and it’s always a bugger when you have to start sticking flyers on lampposts.

Twitter seems to be quite even-handed about its auto-unfollow ‘feature’ because recently my account has been operating a nightclub bouncer policy of one-in, one-out. That is, as I steadily gain followers (yes, I know, some people are so naïve and easily pleased!) nonetheless my total rises at a much slower rate. Typically I get four or five on board and lose three over the side over a couple of days.

Obviously, you lose followers all the time; Twitter’s a funny old place, brimming with those on the lookout for a good bit of offence-taking and it doesn’t take a lot of provocation to flick that switch. I’m sure there are some Tweeters who’s entire raison d’etre is outrage – often on behalf of unknown others. But when they leave it’s usually with a flounce and a pout and announced to the Twitterverse with a flourish and a well-placed and witty 'fuck off!'.

Anyway, this morning, quite early, I tweeted to nobody in particular about the seeming randomness of the unfollow actions. Pretty quickly my ex-pet cyclist hit me with a terse [quote] “There is nothing random about people unfollowing you.” No squabble, no follow-up (pun intended), no ‘gotcha’. Thinking I might have misinterpreted a jolly jape – oh what wags we are on Twitter - I asked if I’d done/said anything to upset him and quick as a flash he came back with… no reply.

If he had ever followed me he was following me no longer. (I say, ‘he’ he could be a granny in Kilmarnock for all I know!) Anyway, I couldn’t help myself. Given that he had unfollowed me and therefore was no longer my bestest buddy and all that, I felt I could finally say something I’d held back for fear of causing umbrage. The penis (again, pun intended) mightier than the sword indeed. I alerted him to a spelling mistake on his profile. Oh, sweet victory

And although I never heard from 'Karl' again, I know s/he read my tweet because that profile is now all spelled-up, proper like. By the way, I’m still following; That’ll teach her as she cycles home to Kilmarnock! 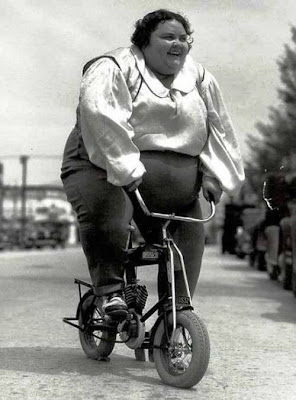