The inspired insult ‘bus wankers’ was coined and immortalised by the idiotic Jay Cartwright in The Inbetweeners. Since June 24th 2016 the phrase has come up for a revival, in application to the deluded denizens of social media who insist that they were made a promise by a non-existent political party, with no power to deliver on it, in the event that this underdog campaign would win. Yes, THAT bus. Bus wankers bring it up all the time, often without waiting for an invitation.

Their argument (and why focus on one so flimsy?) makes no sense, based as it is on the perceived naivety of those who voted to leave the EU because of that one, unrealistic suggestion. If people were gullible enough to believe that the headline figure that we paid to the EU could miraculously be diverted to the NHS instead, how come they weren’t swayed by the alternative ‘promises’ made by Remain?

I say promises, mostly they were threats; but threats made by the entire establishment, media and privately powerful alike; threats of impending doom and crippling poverty. Surely, if the Leavers were so easily persuadable as to think the stand-alone Brexit Bus slogan was a pledge, the massed ranks of the No Salvation Army, all singing from the same hymn sheet must have seemed like incontrovertible truth; actual concrete fact. They would have to be incredibly stupid to vote out when, if they did, there would be nothing left in the pot for the poor old NHS anyway.

It’s funny though, how all the complaints I hear about that bus is from the remain side, who now demand that the piper be paid. They are fond of stating, in the face of good economic news, that we haven’t left yet, but apparently without even a blush expect the £350million to be handed over weekly, right away. In fact we hand over about £2.3BILLION a week to the NHS as it is. I have yet to hear from a bus wanker who voted to leave, which implies that the ones demanding the money now voted against it last year. Don’t be a bus wanker.

But it’s so hard to know who to have faith in. For instance Jeremy Corbyn came out fighting after the Article 50 vote, which he didn’t fight when given the chance. Denying rumours of his fragile grip on the leadership he declared himself the true defender of social justice and pledged to... well to spend, really, because that is all Labour has had as a policy for the last century. Rob from the rich, create a poor voter base; that’s the plan, but I’m sure he means well.

Meanwhile, the poor continue to live among us, hoping against hope that somebody, somewhere is looking out for them in this cruel world. In desperation Hannah wrote a letter to Jehovah: “Dear God, I'm a Jewish widow of 79 and all I have to live on is my tiny pension. Yesterday my purse went missing, along with the £120 I had put aside for my gas bill and food. This was all the money I had left until next pension day. I have never asked for anything before but you are my last hope. Please can you help me?”

There is a special department within the Post Office for letters addressed to Santa, the Tooth Fairy, the Easter Bunny, Jimmy Savile, Esther Rantzen... and God. When Jeff the postie opened Hannah’s message he was so touched he organised a whip round and raised £100 from the other postal workers which he sent back with a note to wish her well and keep believing; better times were surely ahead. He signed it ‘J’. 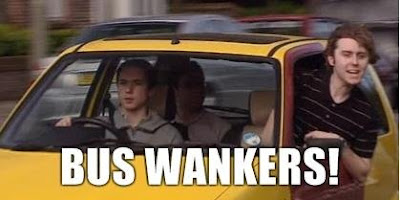 A week later, Jeff recognises the handwriting on another letter addressed to the Almighty. He opens the envelope and reads out to the assembled sorting office: “Dear Jehovah, Shalom. How can I ever thank you enough for what you did for me? Because of your gift of love, I was able to heat my house. By the way, I noticed your kind gift was £20 short. I expect it was those thieving bus wankers at the Post Office.”
Posted by Batsby at 07:49