And lo from the east came three wise men. Wise, for they knew that in the west their every demand would be met. Followed they the twelve shining stars until the land that is milk and honey revealed itself in the form of fiction-free handover arrangements between the people traffickers of old Galilee and the world AD (Africa Depopulated). Their cups runneth over and their fatted calves be slaughtered, for none in the new world would lift a hand to stay their every desire.

Came they to a stable. Well, a converted stable, in a London mews, with no comfort save for central heating and a rent-free roof... and a nearby Starbucks. And they saw that it was good. And so it came to pass that the magi ended their long journey with gifts of gold, which caused the neighbours to be frankly incensed and cry myrrh-der. Whence forth came such ire, asketh they; and with such passive aggressive politeness? How little they understood of this strange new land.

So it was that these three wise elders – though their new passports identifieth them as children - sought out others of their kind to spread the message of great joy through diversity. Soon they had gathered as great and diverse a crowd as this island could provide and all within three streets of the local foodbank. What wondrous world of plenty was this that could feed and house so many and what sacrifice was made by the natives, many of whom gave up their own homes thus to provide?

Answers came there none, but curiosity was piqued and they sought out the truth, for it could be no accident that the stars had surely appeared to them and to them alone. Asking a well-fed Somalian they were told that he had three wives and three houses and the tributes paid due to his many offspring each moon were four-score and many times his annual expectation in his home country. Cameth them next upon a jolly Sudanese who regaled them with tales of great comfort and joy, the state bringing forth bounty beyond all dreams.

“But where are all the native folk?” asked the magi, to which came the reply “They’re all out at work!” And while they laughed and raised their faces to the sky their gaze fell upon a great many banners and lights and shining baubles. “What is this?” they asked, “Why is this miraculous land thus adorned?” At which the Eritreans and the Ethiopians and the Ghanaians regaled them with tales of an old man with a beard who bestowed his bounty on good little children everywhere.

The wise men looked at each other, then grinned. They broke out into belly laughter and hugged each other heartily. “Oh my!” spake they and “Woot!” for great hilarity fell upon them . Eventually, after much thigh slapping and gasping for breath the leader of the trio spake to the small crowd. “Taketh us though for naïve, uneducated dullards? Thinketh that because we are recently come from foreign lands we know not when we are being taken for fools? 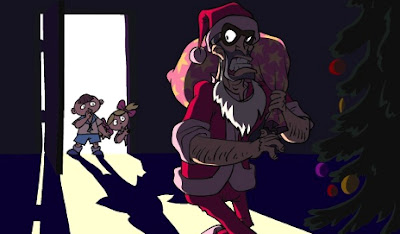 The onlookers knew not what to say; this was surely heresy, for here in the land of Tower Hamlets, one gospel was preached above all others. And wasn’t the evidence laying all around? They tried to explain their word, in all sincerity but the wise man feared for their sanity. He sayeth “Pull mine other one, brother. We may have all just disembarked from the boat, but green as we are, even we don’t believe in Jeremy Corbyn!”
Posted by Batsby at 15:20