It's the Edinburgh Fringe again, and every year it gets worse. From the knockabout proving ground for wannabe comics and offbeat entertainers it has become an international festival of  'the correct values'. While we rail against 'wokery' these clever people (for many are very intelligent indeed) work hard at finding ways to rail against the establishment. And whereas the establishment, in Peter Cook's day, meant the Lords and landowners, the judiciary and Parliament, today the establishment they revile so much is you and me.

Expect a plethora of QWERTY-style 'edgy' identity-based shows, supported by a number of gutless worthies disproportional to their actual representation in society. Omid Djali has a new show there, I expect him to be brilliant, as always. But when he launched in Edinburgh 29 years ago he had an audience of three and was something of a flop. Some years later his superb 'Iranian Comedian' character subtly challenged perceptions of race as his heavily accented first half gave way to his born and bred Londoner reality.

Like all the success stories he worked at his craft and he understood what an audience wants. Many of the newbies, however, will be lauded for saying vagina out loud and slagging off the Tories. Yes, I know, slagging off the Tories has always been fair game, but now 'The Tories' is code for anybody who wants to keep Britain British, to raise their kids in the indigenous culture, to control our borders, police our streets and prevent children from being gang-raped by Pakistanis.

I'm currently suspended from Twitter for first asking whether people would support a short sentence and immediate deportation thereafter, or a very long sentence, paying for their incarceration by hard labour. In a parallel discussion I replied to a no-doubt, right-on Tweeter, asserting that the majority of 'grooming gangs' were white. My reply is below; you decide which bit offended the Gods of Algor. 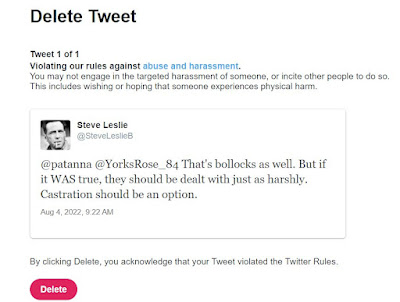 As it happens, I agree to an extent with the judicial arrangements in those parts of the world from which I have no desire to import immigrants. Not quite, perhaps, an eye for an eye, but definitely deterrent sentences, especially those which may prevent re-offending. It is no secret that a very large proportion of the population would support the death penalty for terrorists, traitors and the hideously violent. In contrast castration for proven violent rapists (not those maliciously charged by unreliable victims) seems almost mild; a tap on the. er, wrist.

But here, of course, is where we hit the buffers. Who decides? And what is in 'the public interest'? While the audiences at Edinburgh will lap up the poorly constructed, dog-whistle jokes', the Crown Prosecution Service will go for the low-hanging fruit of angry young men reacting to their sisters' being harassed. And Twitter will allow all the leftist hatred to go unpunished while its algorithms will target 'hate words',no matter the context.

I know Twitter has always been censorious but I swear it has become ridiculous, with suspensions handed out on the flimsiest of pretexts. And having been suspended once, an account is now labelled as offending against Twitter's values, further suspensions becoming an inevitability unless you restrict yourself to rainbow flags and gender diverse unicorns. Anybody who has read Kafka will be familiar with the impossible situation of one's defence becoming evidence for the prosecution. See that last line in the image above?