On Twitter last week, following the death of the Queen, Jeremy Clarkson wrote “One of the things I’ve noticed in these last few hours is that so very many people on Twitter are truly awful human beings.” Shortly afterwards he followed this with “Twitter is a handy and constant reminder that socialists are disgusting people.” As most of you will be aware I have been permanently suspended from that platform for expressing opinions and airing quips which did not go down well with the righteous minds of the brave new world.

It has long been known that left-wingers, who get to set the agenda, tend to be more highly educated than right-wingers, who merely win the spoils. In a typically lazy, left-wing manner, education is equated to intelligence, whilst success, often earned by sheer hard work, is seen as somehow linked to being less well intellectually equipped. And it is true that many wealthy winners in life practically gloat about their lack of education not holding them back.

Clarkson himself reminds school leavers annually that he was not a high achiever. This year it took the form of a tweet from a luxury yacht: “Don’t worry if your A level results are disappointing. I got a C and 2 Us and I’m currently holidaying on this boat.” And in this example pithily puts down the notion that education is the pinnacle of human achievement; you can’t feed your family with degrees and diplomas. 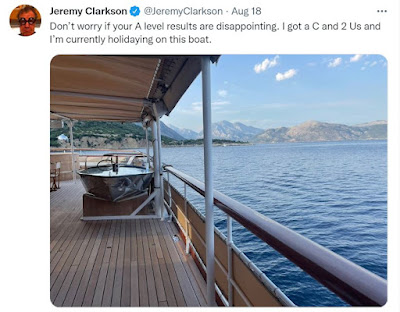 Educational success, in many ways, is just a measure of how readily one is able to absorb a particular narrative and follow it to a conclusion, regardless of its value outside the classroom. Whereas your normal, everyday entrepreneur tends to get easily bored and forever seek new ideas to exploit. A lesson not quickly grasped may benefit from greater application and more diligent studying, but may also be not worth learning in the end.

Perhaps this is why academics, in the pursuit of knowledge for the sake of knowledge can also be susceptible to inhaling the heady vapours of ideology; in the past religious, in the present political. And while the duffers, the also-rans in the A* stakes, are busy taking any job that pays the rent, their learned contemporaries pursue avenues which lead to long decades in disciplines of little real value to the world.

Once, universities thrived on offering valuable sciences and engineering, medicine and management, but in recent decades the humanities have become the academic vehicles of choice for those who probably ought never to have gone on to higher education. This recent Spectator article suggests it might be time to turn the tide.

For my part I have seen the declaration time and time again that those on the left are more intelligent than those on the right. But this claim, it seems to me, relies on a particular definition of intelligence and one characterised by an occasional inability to be mentally agile, to think outside the box, to adapt and thrive. Instead it relies on the dogmatic clinging to tired old tropes, reinforcing groupthink and trotting out long-established arguments.

Much like religion, if you need an origin story and enforcers, with scholars forever justifying the improbable; if you need to keep on developing your themes and reminding people of why they joined your movement; if you need threats of excommunication – or as we now call it ‘de-platforming’ – maybe this is less a sign of intelligence than indoctrination.

Meanwhile those you despise, those lower orders of the right, own the houses you rent, the businesses you work for, and run the country you so regularly disparage. They get up in the morning and go to productive work to create the world you live in. The left may think they occupy the intellectual high ground. The right are happy to let them believe that. Does ‘educated’ really mean ‘intelligent’ in this universe?