I see some people are aghast that Keir Starmer has rejected the Labour Party conference vote to adopt what they regard as the open goal of proportional representation. The fact that they think such a system would be an answer to the political impasse in which most modern democracies now find themselves reveals much about the dearth of political savvy in the membership.

How would it work, I ask myself. Seriously, how? How would you allocate seats, and in whose name would those incumbents vote? Do we just vote for a party then have the bureaucrats divvy up the seats based on total numbers? That is, if the Libdems get enough votes to claim 20 seats in Parliament, how is it decided to which local area area they are appointed? On that basis we might see that most Labour of seats, Liverpool, being gifted a Conservative MP, which while it may be fun for the rest of us would be a death sentence to the duly elected.

If local candidates stand in constituency seats are they then awarded victories based on a lottery system against total votes cast? So a traditional Labour seat gets a Labour MP, if sufficient national seats are won, even though the local vote perhaps swung towards another party. Because it strikes me that we already have a functioning form of proportional representation – the person with the largest proportion of votes wins.

Or maybe we should do away with constituencies altogether, rendering boundary reform obsolete and preventing the sitting party of government from fiddling with the demographics. In which case most MPs would come via the Oxford PPE route and reside in London… and likely tend towards ‘progressive’ stances. Oh how the Shires would wail!

The more I think about proportional representation, the more I wonder what it means, and more particularly, what its supporters think it means. Would it really be a benign, closest-thing-to-direct-democracy system, in which every decision better represents the wishes of the unconsulted majority? I thought that was called populism; apparently the harbinger of fascism. Or would it mean just endless coalitions in which ideals were traded for the sake of cabinet positions?

And what would a government under PR look like? Would we have, instead of single party government, a cabinet selected on proportional grounds? If we think the last few governments have exhibited a distinct lack of unity, imagine what will happen when we let the foxes into the hen house… and then invite along a motley assembly of pigs, donkeys and aardvarks to boot. It’s like the regular calls to adopt a Basic Minimum Wage – everybody seems to have their own idea about what this actually means, but nobody knows how it could work. 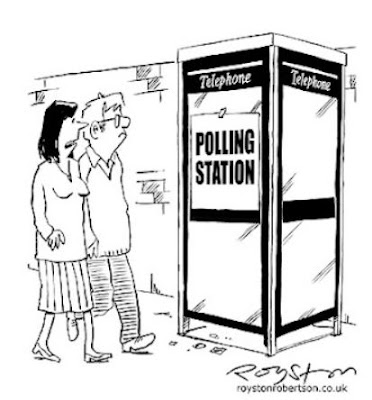 "Something tells me they're expecting a low voter turnout"

Some say that under PR we can make every vote count. I don’t see that at all. Just as now, you can wish as hard as you like that your vote – your specific vote – will elect your favoured candidate, but under PR just as under FPTP there will be winners and losers and those who voted for the losers will feel their vote didn’t count at all.

I have a feeling that voters may, more than ever, turn away from engagement with the running of the country. In only the second nationwide referendum held in the UK, In 2011 the people voted against a system that was, by another name, proportional representation. Lest the irony is lost on feeble minds, when given the chance to vote party-free for PR the population overwhelmingly rejected it.