Get Me Out Of Here

Matt Hancock going on I’m a Celebrity is not just an example of an elected official being tone deaf, it is an outright insult to his electorate and evidence, if evidence were needed, that politics has become a joke. Some are justifying this appearance as a modern-day stint in the stocks – for sure he is going to be regularly voted to perform like a clapping seal – but what have we become that this sort of action can even be seen to be acceptable?

Politicians have long had to live down the strong public notion that they are only in it for what they can get out. This sort of clowning only helps to demonstrate how shallow some MPs can be and how little they appear to care about those they nominally represent. The Tories in particular are seen as the party of corruption and back-handers. Such public displays of frivolity will do nothing to quell that image.

Following the row after Nadine Dorries’ appearance one would have been forgiven for imagining that said appearance had put paid to this sort of nonsense. Boris Johnson notwithstanding we don’t want our public figures to make displays of themselves, and Hancock has none of the charisma of the bumbling blonde bombsite. He is going to make an utter twat of himself, isn’t he? But does that even matter?

The sort of audience that these shows attract might have spectacularly short memories, and they are unlikely to have had a great deal of engagement in daily politics. So, there is a chance that Hancock might, bizarrely, gain some support. There is even talk of ‘the next phase in his career’, whatever career that may be. But if this does, indeed launch him into another means of making a living, what an indictment of our national psyche. 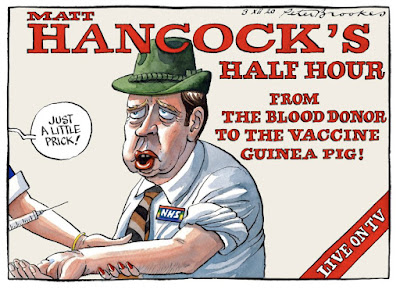 For all the talk of politics and political ideology that I encounter, because I seek it out, I am aware that very much the majority of the population are left cold by it all. A well-placed headline, fact or fiction, will enrage them for a minute and some will cleave faithfully to the mast of whichever ship they have chosen, based entirely on prejudice and ignorance. That such people get to choose who is in charge has always baffled me.

Humans exhibit an incredible range of ability, from almost entirely useless and lazy, to incredibly gifted, talented and dedicated. Only the best of us should really be involved in the business of making it work for all. The average human being would be entirely unequal to the task. Please don’t tell me that Matt Hancock is among the best.