Take right from left and what do you get? It doesn’t seem to matter what the sum, you always end up with owing. Owen Jones. I heard him interviewed on PM on Radio 4, repeating much of the rubbish from this article in the ‘Independent’. Why the BBC would so regularly seek the opinions of the baby-faced class warrior I have no idea and of course, true to form, he deployed the ‘D’ bomb. In fact this, his most favouritest ever word in the whole wide world, appears in the very first sentence. Obsessed is Owen with the old demonisation. Bless.

He was writing ostensibly about George Galloway but he may as well have been writing about benefits, chavs, private landlords, ‘bedroom tax’, nasty Tories, ‘framing the debate’ and so on because he managed to bring all those chestnuts into both the Independent and the PM piece... Of course, University College Oxford history graduate OJ alone understands the plight of the downtrodden and like the hero of his own 21st Century Beowulf he bestrides the political divide like... well, like a petulant child, really.

Next up on the cat’s whisker was a short piece about the juvenility of modern Britain – grown-ups wearing children’s clothes, reading Harry Potter or playing teenage digital games on the train while drinking pop and chewing sweets and getting unnecessarily exercised when they don’t get their own way. The priorities in so-called ‘austerity Britain’ do seem to be somewhat skewed to a sense of entitlement rather than need. This is not a generation who has seen strife or coped with hardship.

And then, big fun on The Moral Maze, listening to an ardent leftie doing her best to both defend the rights of parents for choice in their children’s education while clinging to her right-on principles about outlawing private schools - deny choice to everybody but me. I paraphrase here, but not much: “My area's very diverse. It's diverse... which is good, that it's really diverse, I mean... it really is good, diversity, I mean... but my needs and the needs of my oh-so-special child were too important, so I just had to put them into private school.”

Grown-ups may call this hypocrisy; “Make your mind up woman!” I ranted at the radio, about how absurd and churlish a mindset this was – having cake/eating cake - when Melanie Phillips attacked another participant’s attempts to decry private education as a “Juvenile obsession with class war.” Yes! It’s not just me, then.

Me, me, me, me, me, me, me... (count them) That’s what it’s all about. While I get accused of being heartless, what I see around me is a world where all these fluffy socialists really only exist to feed self-righteous notions of their own worthiness. “I am a socialist. Therefore, I am nice. Thus you must indulge me.” In the Just William books Violet Elizabeth would “Thcream and thcream and thcream until I’m thick!” a threat so terrible it would bring the world that revolved around her swiftly to heel. Sound like any grown-up children you know?

Sooner or later though, we must all surely grow up and recognise the untenability of Violet Elizabeth’s position. No matter how hard recent governments have tried to extend your childhood into your twenties and even thirties, sooner or later you will be screaming to yourself in the dark. A favourite quote, often mis-attributed to Churchill, but of much older provenance declaims, “Any man who is not a socialist at age 20 has no heart. Any man who is still a socialist at age 40 has no head.” 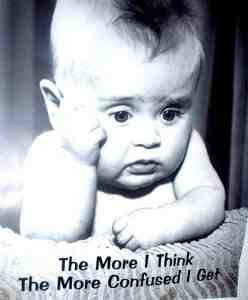 So, kiddies, it’s time to grow up, take it on the chin and for the next forty years vote to save your country, not your unsophisticated brattish conscience. Leave your angry infant social radicalism behind until your dotage when, having paid your own way and reared your own kids you are free to dabble in whatever toothless and inconsequential branch of liberalism best suits your conscience and state of senility. It's time to spit the dummy once and for all.