Although they have the same Greek root, polis, politics isn't about policy, as much as it pretends to be; it’s all about the wielding of power. In our flimsy facsimile of democracy that power derives from a mandate; it requires the garnering of votes via the grubby courting of popularity and the current popular pomme de terre chaud is single sex marriage.

Nobody knows how many gay people there are. Nobody. In the 1970s the gay rights movement distorted what Kinsey had said in his 1948 study and promulgated a belief that 10% of the population was gay. I was at university in the seventies and remember it well as, to much giggling (we were, after all, only kids) we tried to decide who amongst our peers it might be.

Of course, at the time we were all familiar with such comic figures as John Inman, Duncan Norvelle and Larry Grayson. As hugely camp as they were, they were nevertheless accepted without question as people first and poofs an unimportant second. Before gay militancy nobody was remotely interested in what homosexuals thought or what they did ‘in the privacy of their own homes’. Nobody really batted an eyelid until Stonewall came along and started shoving it down our throats.

Of course, since those days the closet door has been flung wide and our streets throng with openly gay people. Except they don’t. Nobody knows, but a recent ONS Survey reports - like the cost of national infrastructure - a figure ten times at odds with the original estimate. So, if only 1% identify as homosexual why has the government risked a major split over creating recognition for a union which affects so few, when there are pressing matters which affect every man, woman and child in the United Kingdom?

One word; Politics. However this un-promised, un-mandated and (by-numbers) indifferent vote has come about it is causing upset across the political classes. In the wider populace most people really, seriously couldn’t give a toss. We’d like a job, say, or a pension, or maybe a say in who makes our laws, but gay marriage? Seriously?

It is, by all objective measures a minority issue and in a ‘democracy’, minorities get short thrift. Minorities can of course become majorities (check out the Muslim population by 2050) or they can enlist the support of others. In this case, ‘the young’. Young people are interested in matters of relationships; of course they are. And why not? I must have spent the majority of my free time at university trying to get laid; I would be very sad if today’s students were not just the same.

And this brings me to Twitter Land where 140 characters can cleave nations asunder in moments; where an ill-chosen word or a hastily penned retort can cause outrage and outpourings of vitriol far in excess of its intent. And yesterday’s spat? I said I believed that the vote of young people was unreliable because the young are largely only interested in themselves. What a bad man I am, for which I apologise. What I thought was a reasonably level-headed conversation with Gareth was intruded upon by Reece, who had these choice words for me:

Over a number of tweets he called me a pathetic, naïve, patronising, incompetent, tit. He decided to read into my original words that I believed all young people were stupid. And he even endowed me with having the ridiculous notion that intelligence was a function of age. It’s amazing what you can do with words when, as he rightly acknowledges, you lack experience.

So, Reece, let’s look at all that, shall we? We are all stupid. At least we are all born that way. Unless somebody is going to tell me that knowledge is hereditary, everything we know has to be crammed in somehow. Parents, schools, observation, mishaps, happy serendipity… life. We learn by living, ergo, the longer we live the more we have the opportunity to learn. Some young people are of course geniuses and many older people are morons – but generally they always were morons. It is almost never the case that intelligent young people get less wise with age. (Of course, you are welcome to call me a moron, too, if that helps.)

The most important experiential advantage an older person has over the young is that he has already been where they now stand and he knows what’s around the corner.  The reason I believe the young vote is unreliable is because most people have different priorities as they age. When you’re young – and even more so these days – the world revolves only around you. As you mature you realise that you need jobs and freedoms to allow you to develop and those things become even more important when you have other people dependent on you.

The gay marriage issue is not really a matter for politicians to decide and certainly not now. It should have been debated properly, researched, agreed and passed as ‘any other business’. But politics isn’t about policy, is it? Politics is about mobilising support to win power and every vote counts. Younger people have been roped in to clamour for this non-issue because they will vote for things that interest them now; they haven’t yet seen their future. We have.

Wilson did it, Blair did it. The youth vote can tip the balance of power. But every time it has done so it has tipped in favour of a world order that just doesn’t work. The splits caused by the row over gay marriage may be enough to return Labour to office. If that happens, we will remain prey to the European juggernaut. And this was why I said and still believe that the youth vote, while possibly critical, is unreliable and easily swayed. 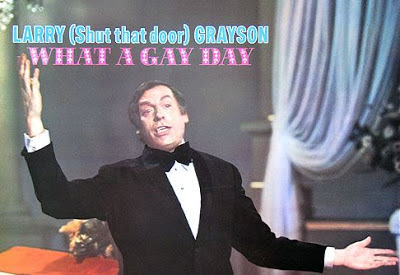 Everard never had all this trouble with young boys!

So, let’s get Tuesday’s motion out of the way and please, for pity’s sake, let’s hear no more about it. Age prejudice goes both ways, but in the case of older people it is at least an informed prejudice. Sometimes though - and I believe now is one of those times - we should be standing together to fight much bigger issues than who does what with whose ring. It’s time to fight together to shut that door on Europe.
Posted by Batsby at 09:35