The Catholic Church hasn't got an exactly glowing record of compassion and humanitarian deeds; the crusades, the Conquistadors, the Spanish Inquisition. Wielding massive power over billions the Vatican is known for secretive wealth accumulation, secretive political machinations and plain old secrecy and has never had an easy relationship with many outside its embrace.

The Popery Act 1698 was an Act of Parliament passed in 1700 as "An Act for the further preventing the Growth of Popery."

In 1837 the Rev. Joseph Irons preached in Camberwell, "In fact, Popery is not a religion at all; and it is a sad delusion to suppose, that a mere difference of creed is all that exists between Protestants and Papists. Popery is a political conspiracy to subjugate empires, kingdoms, thrones, and states, to one tyrant... To accomplish this political purpose, his agents assume a priestly authority, and arrogate to themselves the power to save or to damn souls. Thousands of their infatuated vassals believe this, and, consequently, dare not refuse to do and say anything and everything which these vested wretches command."

Sounds to me like the Communism, Fascism, Islam or the EU of his day - take your pick.

Guy Fawkes was a papist conspirator who tried to blow up the Houses of Parliament and kill King James I. Much to be applauded in that, you say, but nevertheless he was an enemy of the state in the name of a calling based on blind faith.

Never far from Controversy the Catholic church has always been something of a global PR disaster and the incumbency of Pope Benedict XVI, a.k.a. Joseph Aloisius Ratzinger has been dogged by scandal. First it emerged he'd been conscripted into the Hitler Youth, more recently he's had the usual Catholic millstones of contraception and women priests to deal with. But the first Pope to resign for almost 600 years will perhaps be remembered best for the massive amount of child abuse which has hovered in the wings throughout his career. 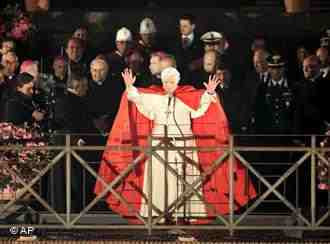 D'ya wanna be in MY gang?

Whatever good he may be ultimately remembered for, the non-Catholic world will shrug and dismiss it all as the usual melange, pastiche, hodgepodge, mishmash or patchwork of secrecy, ceremony, truth and lies on which all religions rely. So much Papal Bull!
Posted by Batsby at 06:31