The Happy Paws Veterinary Clinic and Bide-a-wee ‘rest’ home for retired furry friends is a bustling place most days, but on a Friday there is a sense of foreboding in the air when pets are left with the clinic as weeping children are lead away and fed stories about how old Fluffy is going to retire, down on the farm.

It’s getting late in the afternoon now and the last three patients are waiting quietly in their holding pens on Doggie Death Row at the back of the surgery. As old lags will, they give up their stories to each other and make their peace:

“Hi fellas, my name’s Tyson” announces the Pit Bull “I suppose it was only a matter of time before I landed myself here. There should be warnings, there really should. I mean everybody knows we’re an excitable breed but we were intended for one thing and one thing only. Once we get the blood pumping there’s no stopping us. And you know how excitable kids are. So there I am, running about the garden after this stupid ball and the next thing you know I’ve got little Tommy’s leg clamped in my jaws and I’m biting and biting and the red mist is coming down. Apparently they had to beat me unconscious and well, here I am…”

“So, in for the, you know, the lethal injection?” asked the Rottweiler.

“Yep, ‘fraid so. What did they expect? How about you?”

The Rotty takes over. “Hi, I’m Rocky and I’m a bit pissed off, to be honest. After all, I was only doing my job. I’ve lived in that scrapyard since the day I was born and I’ve always known the rules. Sleep and loll about all day and if the boss is about I can be as daft as I want. But once that gate is locked up and I’m off the chain the yard is mine. Up until now I’ve just made plenty of noise and bared my teeth, but last night the pikeys came over the fence and started on me with sticks. Well, I wasn’t having it and I was only just getting started when the Old Bill shows up. I was caught, bang to rights, drawing blood. So…”

The pit bull mimes a knife across the throat. “Yep” agrees Rocky, “but what can you do? Rules is rules.” The pair look towards the Alsatian, forlornly sitting in the last cage. “What’s your story, pal?” asks Tyson.

“First off, it wasn’t my fault.” The other two dogs pass a knowing look; they all say that. “Well – my name’s Rex by the way – I used to live with a good looking young couple…”

“No, quite the opposite. They had a row, he moved out, so there I was alone in the house with a cracking fit mistress. Gawd, she was lovely- used to drive me to distraction. Now, we have a downstairs bathroom and yesterday she’d left the door open as she was running a bath. I was just sitting on the hall rug, panting a bit when she turned to me, smiled, dropped her robe then got down on her knees and bent over the tub.”

“Yeah, so I took it as an invitation and, you know, I was like a stick of rock down there, so I was in like Flynn! She was well-shocked; it turns out she was only testing the water temperature.”

“Bloody hell!” repeated Tyson “And you’re getting the injection for that?”

“Oh, so they’re chopping your balls off?” asked Rocky. 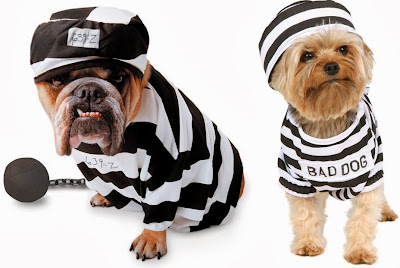 “Neither” said Rex, “I’m having my nails clipped.”