In the assault on our intelligence which is all that politics is, Ed Miliband has chosen his weapons in this war of words and foremost in his arsenal is a vacuous but deadly phrase. The most important thing about sound-bite ordnance is that it conveys voter appeal, yet has no substance and provides the enemy with no counter attack. How can the Tories respond to the howitzer of the ‘cost of living crisis’ without being seen as downright nasty? Well they might like to compare ‘poverty-stricken’ Britain with the Philippines right now in the aftermath of Typhoon Haiyan, except to do so would be crass. It’s worth a thought though, because most of us will never know true crisis.

On the African plains, herds of wildebeest make their meagre living by moving as the seasons change. At times of plenty life is good for a brief while and everybody benefits, yet the predators still pick off the weak and detached; those living on the fringes. When the great herds migrate, their whole society changes its shape and the fringes are no longer occupied only by the feckless or stupid, but the turmoil of motion pushes even strong individuals to the outside where the lions wait… And then there are the crocodiles.

In life people move from job to job, circumstance to circumstance. Some by choice, some by folly and some by sheer misfortune. At the centre of the human herd are the greater mass of working or welfared classes; on the fringes those with a more adventurous or unfortunate disposition and some thrust there by the forces of nature.  But all of them are engaged in ‘making a living’; that’s what we do. Other than survival there are no genuine higher purposes to life itself but humans have sought to fabricate them and a bloody good job we’ve done of it.

Beyond the strive for mere survival, when the bellies are filled, humans engage in remarkable flights of fantasy and fancy – diversions of art, sport, literature, technology and for children of all ages, tales of gingerbread houses and wolves in the woods. All of this represents a surplus above and beyond the mere cost of living which, after all, is simply a combination of food and warmth and shelter. And if you think we value so highly those great works, consider how many former civilisations have set about destroying their own culture as ravaged populations have turned on the non-edible architecture in frustration or, in despair, simply walked away.

The Roma are coming – if the Filipinos could they would – they are a herd on the move. Until now their borders have been constrained but there are no crocodiles in the English Channel and to them the grass is very much greener over here. When Miliband talks about a cost of living crisis he is doing it to make you believe a lie; that your livelihoods are under intolerable strain. They might be harder than they were five years ago but for the vast majority of ordinary people little has changed apart from the perception of the size of the surplus. 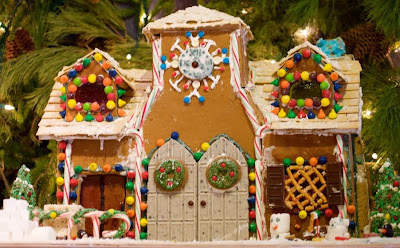 "...and in England, people live in gingerbread palaces!"

When you watch your big television as the kids use their own computers and you all gorge on pizza and fiddle with smart phones, complaining all the while about your miserable lives,  subsisting on the bread line you might want to take a moment to ask yourselves a question. If life here is so bad, if we truly have a cost of living ‘crisis’ why would anybody, let alone tens of thousands, want to abandon their homes and their culture to come to Britain?
Posted by Batsby at 07:26