The searchlights swept the waste ground outside the perimeter as the siren wailed, raising the alarm. Four pig-dog Englischermenschen had escaped and the Commandant of Stammlager Luft III, deep in occupied Poland, was extremely displeased. He ordered the dogs unleashed and search parties set out in pursuit as fifty of the remaining prisoners were rounded up and made to stand in the exercise yard, stripped to their underwear in the freezing blast of easterly air which swept across the steppes from the Urals. Some would not survive the night.

In the distance the dogs were becoming frenzied as they scented their quarry and shortly afterwards shots were heard in the distant woodland. Soon the noises of chaos gave way to order and minutes later the headlights of a returning vehicle threw the barbed wire coils into stark relief against the deadly night. One escapee recaptured, the others still at large seeking destinations unknown. The bedraggled prisoner was brought before the Commandant in a bare interrogation room.

The harsh light cast deep shadows and bleached out all colour as Colonel Fuchs paced back and forth, causing Flight Lieutenant Atkins to blink as he tried to fix his captor with a challenging stare. Fuchs stopped pacing and positioned himself so that Atkins had no option but to squint against the cold beam directed in his face. For long seconds both men regarded the other with cool disdain. Eventually, Colonel Fuchs spoke, in quiet measured tones.

“So, Tommy, you vill not talk. But it iss no matter . Vhile you sit here, silent, ve are rounding up ze last of your men and if you do not talk, ve have vays of making zem tell us everysink ve need to know.” He began to pace again as he delivered his well-rehearsed lines. “You sink ve vill tortue you? Vell don’t you vorry, Atkins, ve von’t.” He snapped his fingers and a junior officer clicked his heels to attention and marched out of the door, returning seconds later with a bound, half-naked prisoner flanked by two burly guards. They proceeded to beat him to his knees. “Ve vill torture him, instead.”

Atkins flinched but the prisoner, shivering violently and with fear in his eyes caught his gaze and with an almost imperceptible shake of his head indicated he would not break and Atkins should say nothing also. He nodded back; Colonel Fuchs noticed the gesture.

“Oh, you English, you sink you are so clever. Say fuck-nothing, yah?” he took a backhanded swipe at the prisoner as the guards held him upright. “Und don’t sink zat I do not know vhat you say behind my back. You take ze Mickey Mices out of my name. ‘Fuchs zis’, you say and ‘Fuchs zat’. You sink zis iss funny, hein? Vell let me tell you Britischer; my name, it means Fox, you see. I am a vily old fox and you – you are just my rabbit. Und now it is I who haff you in my headlights.”

Atkins looked at the colonel, trying to discern what he already knew and whether he understood the bizarre mixing of metaphors which conjured up the image of an intrepid fox driving a Bentley along Wardour Street. If they had been overheard mocking his name maybe, just maybe, they also knew that this escape had been a mere decoy to dilute the garrison strength. Right now, if all had gone according to plan, a hundred more allied airmen would be preparing to storm the weakened perimeter defences and escape to victory. If Fuchs knew, then Atkins had to give the signal to cancel. 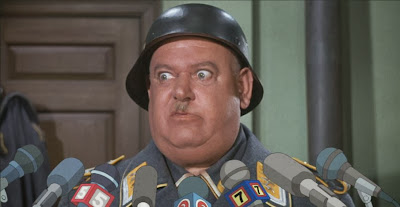 “Oh yes, “ the colonel continued, his pace quickening as his tone of voice became more strident. “Oh yes, you English think that ve Germans know fuck-nothing. Vell, let me tell you, Flight Lieutenant…” Atkins felt a panic rising in his breast as the Commandant lowered his glowering face to within an inch of his own. If the Germans knew the plan they would be ready with machine guns. If the Germans knew, he had but one chance to shout the abort command and save their lives. A moment’s silence, Atkins tensing, ready to cry out… the colonel continued. “Let me tell you, Flight Lieutenant Tommy Atkins. We Germans do not know fuck-nothing.