So, the great Corbyn United National Treaty for the ‘reckoning’ he keeps mentioning but won’t define has been launched. When I say launched I mean given a bit of a push from the side of the duck pond with everybody holding their collective breath, wondering how long the newspaper ship of Corbyn’s imaginary state will last before it becomes waterlogged, blows over or gets retrieved by a big, wet dog. It has no compass, nobody is steering it and like Jeremy’s blowhard, tough guy “Ooh, I’m so angry!” speech, relies on nothing more tangible than hope to complete its journey. Being sodden by now it’s not even fit to line the budgie’s cage.

You wanted high spending, punitive taxing, excessive borrowing, road-to-ruin economics and here it is, writ large. “Blah, blah, blah... inequality. Blah, blah... fairer society. Blah, blah, blah... thirty days to save the NHS. Blah, blah Blair, blah...” It’s all there, all the naivety of a sixth-form ingénu on a platform to save everything from the clutches of some mythical status quo which, despite all the fear, is singularly failing to bring about the disaster he wants to save us from. It’s frankly insulting to imagine anybody could believe it yet, there they are, hands held out like welfare-seeking zombies, desperately short of brains...

Life is simultaneously both simple and complex. The simple part is that what actually matters to you is already largely under your control. You don’t like where you are? For all but an unfortunate few, the solution is in your own hands; work harder, work smarter, change your ways... or learn to accept what you have. It is nobody’s purpose in life to improve your lot; the best you can vote for is a government that gets out of your way. It might not be easy, but it is pretty simple and you only have yourself to blame... or to praise.

The complex part is way beyond your control and unless you are a latter-day Machiavelli, negotiating the shark-infested waters of society’s loosely interlocking parts is likely to get you nowhere comfortable. You want a pay rise? Far easier that you work for it within the bit of the system you can influence personally than try, somehow, to change the way an organisation operates. Meddling from the outside, as socialism always wants to do, is almost always ineffective and ruinous. The law of unintended consequences is an ever-present threat:

Raise wages by edict and employment falls, consumer spending falls with it, prices rise and a policy intended to help thousands adversely affects millions. Insist on diverse hiring quotas and competence suffers, industries fail and thousands lose jobs. Penalise fossil fuel users to artificially promote ‘renewables’ and throw huge amounts of national funding at foreign manufacturers of equipment, thereby literally giving our national money away. A vote for Corbyn is a vote for changes so fundamental you can’t imagine - nobody can - how potentially ruinous they might turn out. 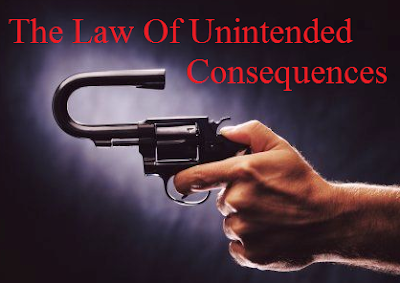 But, hey, your choice. By all means campaign for a better world, but recognise what is within your purview. Just remember a couple of things; the Greek proverb ‘Physician, heal thyself’ applies as much today as it ever did in biblical times. And while we’re on a religious theme, believer or atheist, I've always found  Reinhold Niebuhr’s Serenity Prayer a useful maxim: God grant me the serenity to accept the things I cannot change, the courage to change the things I can, and the wisdom to know the difference.
Posted by Batsby at 07:01