The war on terror has once more been visited on our shores and feelings have been running high as the touchy-feely, rainbow coalition of appeaseratchiks hug each other and form protective rings around mosques while the stinking, racist, lower-class lynch mobs eschew candlelit vigils for their own, more direct kind of vigilantism. The police are so busy controlling rampant islamophobia there isn’t a cell free within a hundred miles radius of Manchester.

But other security forces have been busy on our behalf, rounding up random jihadis in dawn raids and swooping on those well-known hotbeds of seething hatred for the hand that feeds them; university campuses, madrassas, back bedrooms in seedy suburbs and kebab shops. By all accounts the tally of arrests and detentions is growing and secret enhanced interrogation suites are being quietly commissioned to deal with the business of ‘intelligence gathering’. Fortunately, those charged with defence of the realm have never bought into the simple lie that torture never yields truth, so widely promulgated by our social justice peaceniks.

I always fancied one of those waterboarding holidays, but it seems that even there the early ISIS bird gets the preferential booking treatment worm, with each potential suicide bomber getting peaceful, solitary, individual accommodation free, at the expense of the UK taxpayer. Some have given up the goodies at the first sight of a dental pick but other soldiers of allah have been harder nuts to crack, so the story goes.

“You filthy infidel pig!” spits Abdul at his interlocutor, as the current is once again applied. “I will never betray my brothers in jihad!” Out comes the wet towel and Abdul splutters as a cascade of cold water persuades his brain that he is drowning. Still no spilling of the beans. As they work on through the night, he taunts them; he seems to even be enjoying the pain. “I long to die for my faith! You will never break me. You will have to kill me, then I will take my reward in heaven. 72 virgins await me.” He pauses to spit blood then grins up at his captors, “Blonde virgins,” he says, “blonde and white and all of them fifteen... like your daughters!”

Eventually Abdul is released after questioning. He wasn’t really tortured at all – this is just the story he intends to tell all his friends once he gets back to his study bedroom in college. But deep inside he believes himself to be a fierce lion of islam, scourge of the west, which has given him everything he has ever known. But Abdul’s reverie is cut short as his life is ended, appropriately enough, by the speeding truck, in front of which he has just stepped. He seems to close his eyes for a second... 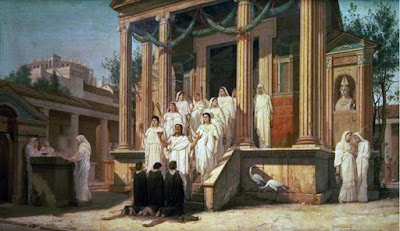 When he opens them again his first sensation is of a bright light and a feeling of peace and contentment. He looks around and sees that he is indeed in heaven and before him stand, as promised, the 72 fifteen-year old virgins, all of them white, all of them naked and all of them with hair the colour of bleached straw. They smile as they walk towards him and surround him. Abdul stares, open mouthed as one of them takes his hand. “Welcome Abdul. We are here for your eternal pleasure... you can call me Larry.”
Posted by Batsby at 07:22