Eye of the Tiger

The pursuit of happiness and the quest for the Holy Grail are lauded as the endeavours of ordinary and honourable men. The fight to survive is built into all of us but the drive to succeed is bequeathed to relatively few. One alpha dog in the pack, one full-maned lion; the leader emerges as the one with the best credentials while the losers either fall in line or slope off to become lone wolves. Not only are we no different from the animals, we use animal analogies all the time and our folklore is filled with tales of derring-do in pursuit of riches. We even sing about the fight for supremacy:

It's the eye of the tiger
It's the thrill of the fight
Rising up to the challenge of our rival...

The current media-fest around the so-called Panama Papers is typical of a society smelling blood. We think we’ve found a weakness and we’re trying to mount a challenge. With quite spectacular naivety the press pack is circling the prey and imagining that here is the answer to... something. If we can only slay the monster Grendel the villagers will be able to live in peace. But Russia and Pakistan seem to be bored with it all already, or at least accepting it with a shrug. And while David Cameron’s family tax avoidance affairs come under scrutiny, there will be little enough to gloat over when he leaves office, soon after the referendum.

Corruption is part of the make-up of people who are ruthless enough to gain that level of success. Few and far between are the business giants without metaphorical blood on their hands, so much so that the very few who do appear to be spotless are held up as shining examples of a rare breed. Backstabbing, elbowing aside and teaming up against rivals are human traits you can see in any child until it is beaten trained out of them. But some are so driven they ignore it and succeed anyway. It is a trait we applaud in athletes, adore in leaders, yet abhor in businessmen and politicians. Given the shitty ride those who stride the corridors of power experience only the driven survive, let alone thrive.

Left entirely unchecked of course, the apocalyptic prophecies of tyranny by a cruel ruling elite could come true – it already does in some regions of the world. This is why we came up with democracy which, on the face of it, would appear to be rule by the majority for the majority good. It just so happens that the greater good is often served by letting wealth creators actually get richer still because this, no matter how much you pooh-pooh ‘trickle down economics’, does actually provide employment, incomes and hope for those of us on the lower rungs, even if it is only the crumbs. The alternative may be no crumbs.

But these occasional coups and cries of conspiracy provide mere entertainment. It’s the mob, baying for blood and in the aftermath, those who can will simply take their tax avoidance elsewhere and carry on as before. If they can’t do it in Panama, some other haven will spring up to serve their hoarding needs. Squirrels hide nuts for the winter; we put aside money for the rainy days. This is just the same but with bigger beasts. To imagine you can end corruption is nothing but a pipe dream – it is a part of our nature. 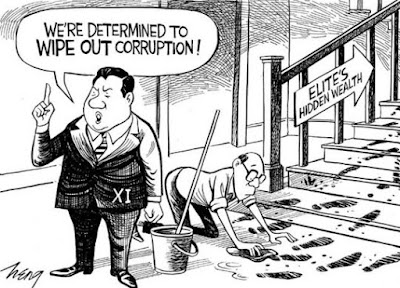 Which is why the limited form of democracy we have, with its limited ability to force real, revolutionary progress is perfect. We muddle along fine until a few people take the piss. We temporarily bring them down and then everything goes back to normal. Corruption thrives, however, where there is no democratic accountability. I wonder what we will uncover when the International Consortium of Investigative Journalists turns its searchlight beam on the European Commission?
Posted by Batsby at 07:34