The latest referendum polls showed little change and the government, having decided to campaign for the continued servility of the British economic machine to the puppet masters of Brussels, decided to hold a summit to assess the way forward. After all, their future EU commissioner jobs were at stake here. Around the table various strategies were discussed and a plan of sorts began to come together. But given the exposure of some high profile figures to the enhanced scrutiny of the public gaze they were struggling to come up with a strong enough character to lead the final push.

“It’s as if we are like the components of one body” said David Cameron, “all working in concert to keep this thing viable...” adding, for no reason other than it was expected, “...going forward.” He then went on to propose that all around the cabinet table compared themselves to a vital organ as a means of explaining how they fitted into the whole and how they would bring new insights to appeal to the undecided voter.

"I should be in charge," said Sajid Javid “I am like the brains and that, because of all the things what I know. I used this knowledge to rise from being the son of a bus driver to be like what I am now. And where I am now and that. As the brain I run all the body's systems, so without me nothing would happen, innit." The cabinet nodded, unconvinced.

The resident of No.11 stood to address the assembly. "I should be in charge," said George Osborne. “Money is like the blood of the economy and I am the heart of the operation. Without me, circulating life-giving blood – by which I mean money, of course – all your other functions would waste away. The heart is the most important organ.”

"I should be in charge," said Liz Truss. “As Secretary of State for Environment, Food and Rural Affairs, I am like the stomach. My department preserves the life-giving environment so we can grow the food which the stomach processes to give you all energy. Without that energy the blood is no good and the brain would be starved." Murmurs went around the table; she had a point.

Patrick McLoughlin cut in: "I should be in charge," he said. “As Transport Minister I am like the legs and I carry the body wherever it needs to go." Another good point, the murmurs suggested. Then, "I am the eyes," said the Theresa May, "I send out my security forces and I see everything. Without the eyes the body wouldn’t be able to see where it is going.”  A flurry of others added their own bids, until a cough was heard from the head of the table. David Cameron was ready to speak again.

“You are all forgetting the rectum.” He said. “The rectum is the most powerful.” The cabinet laughed, nervously. “As the rectum, I am responsible for waste removal – I get rid of those we don’t need." Everybody fell silent and for a few seconds nobody dared breathe. “If I choose to shut down, within a few days the stomach will bloat, the brain will get headaches, the legs will wobble, they eyes will blur and the blood will become toxic.” In a unanimous vote it was confirmed he would lead the charge. 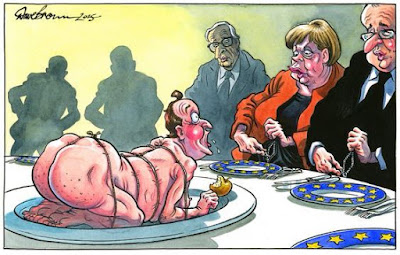 The arsehole of Europe?

The Moral of this story? No matter who does all the work and no matter how much effort they put in it is always the arsehole who is charge.
Posted by Batsby at 07:36