Down with the Kids

Kids are rubbish! I mean, look at this selection of so-called 'art'. For all the free-form abstraction it's hardly Kandinsky, is it? 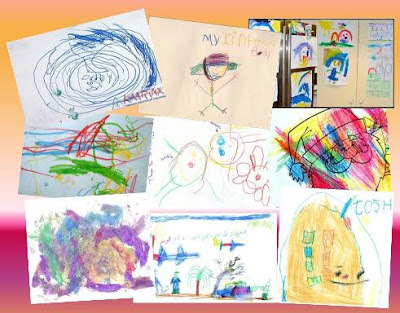 If you look closely, the picture at bottom-right reads "Tosh". Quite. Despite the liberal use of neo-non-figurative image-quizzing and a flowing synthesis of geometry-negative interspace chromatics, it's still pretty crap, isn't it?
Now, I'm not so naive to not realise that a goodly number of drooling parents will be cooing over these very images with expressions of uncontrolled delight. That's because, as parents, they have lost all reason and all perspective - a perspective they will suddenly be shocked back into when those self-same art prodigies turn into spitting, screaming hormonal teenagers.
Too late, mate; you told them they were artistic! Would you have encouraged them to go into construction if their early DIY efforts were anything like these below? No. Of course not. Because then you would have been responsible for Nick Knowles and shame on you for that. 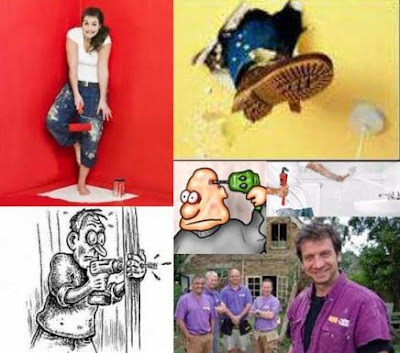 So why do so many parents engage in brainwashing and hot-housing at a time when kids are, let's be frank about this, pretty bloody useless at just about everything? Let 'em be. And let 'em be kids. This is the argument of an article by by Judith Woods in today's Telegraph, refuting the efficacy of ultra-early years education. I tend to agree.

Play until five. Then learn 'em to read, write, count, and - crucially - learn, from ages 5 to 7. After that work them like fuck until 11. Then examine them, select and stream and specialise and bingo. The ones good at art will do that and the ones good at proper stuff will get jobs and pay for them.

If you try too hard you'll only end up with socially and politically aware little monsters, too scared of making important choices and incapable of holding down a real job, who will disappoint you in more ways than you can imagine. I expect this is exactly where Mr & Mrs Miliband went wrong.
Posted by Batsby at 08:47