The NHS employs "more than 1.7 million people". Hang on a minute, I'm going to fetch a calculator. The UK population in mid 2010 was 62.3 million, so that's... erm... 3.88 percent of the population. If that is true, roughly one in twenty-six people work for the NHS! (Their figures - see the link)

The NHS website goes on to say, "Only the Chinese People’s Liberation Army, the Wal-Mart supermarket chain and the Indian Railways directly employ more people."

What? That's insane! That is utter, dangling bollockey bollocks! And that's 3.88% of the total population. As a proportion of income-tax payers it works out closer to one in fourteen! And yet I don't know a single one of them. Which means that, statistically, somebody has to make up for my ignorance and only know people who work for the NHS. Wow, I bet that makes for some morbid dinner-party conversations.

Now I know some people are chronically sick and need almost 24-7 care, but they must surely be a teeny-tiny minority. And some others seem to be accident/injury/sickness prone, but they are the exception and some of them are just taking the piss.

But, presumably, the rest are more like me. I have had actual influenza once in my life. I broke a collarbone in 1979 and an ankle in 2008. I had quite severe tonsillitis in Brazil in 1995 and I get a sore throat or a sniffly cough about once a year (although I'd never dream of going to a doctor for it). Oh yes, and I put my back way out in 2004, so I took it easy for a few days then phased myself back into work. Actual medical attention in those 33 years - about a day's worth if you include waiting, which makes one day in 12045 (not including leap years) or 0.008% of my time.

Now, if I apply some judiciously clever, agenda-driven, left-wing-style mathematics and statistical analysis to these  I can prove something important, probably.

Here goes. If I need medical treatment for only 0.008% of my life and yet 3.88% of the of the entire population works in public healthcare that must surely mean that the average citizen consumes 3.88 ÷ 0.008 = 485 times more medical resources than me. Factoring in the provision for private healthcare we have statistical proof, if proof were needed, that I am around 500 times 'better' than the rest of you! 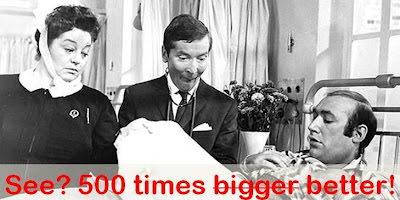 This is why I should be king. I believe I can rest my case.
Posted by Batsby at 06:46