A lot of truth here in a Daily Mail article – “Right-wingers tend to be less intelligent than left-wingers, and people with low childhood intelligence tend to grow up to have racist and anti-gay views”. While both assertions are demonstrable, there is no real causal link. But wait, you’re thinking, this can’t be the Batsby that we’ve come to know and loathe on Blogger, surely? Shouldn’t he be fighting his [Boo, nasty Tory] side? Nope. There’s nowt to disagree with. In fact the study positively supports my thesis that it is human nature to be right-wing.

The majority of the world population is of relatively low intelligence on any absolute scale. That is, the mean is a long way short of the median. This is as true for the UK as it is for the planet and here in the UK, given that a large number of ordinary working people vote Labour, it is a reasonable assumption – borne out by plenty of evidence – that less intelligent people will vote against their own interests. As we shall see…

The interests of working people are broadly this: that they get to keep most of their income, that they contribute what is necessary to run programmes in the national interest – basic healthcare, education, infrastructure services, police and armed forces – and that they should not have to pay for the obsessive, ideologically driven demands and excesses of minority interest groups. In other words, most ordinary working people should naturally hold right-of-centre views and vote against Labour. The fact that many of them vote FOR oppressive state intervention in their every waking moment is proof-positive that many natural right-wingers are inherently quite stupid.

Still at the arse end of the intelligence spectrum, those who are largely unemployable are at least smart enough to know on which side their bread is buttered. Whilst still holding many of the same normal human views as their working peers they are obviously that bit ‘more cleverer’ as they vote for the side which keeps their backsides firmly glued to the sofa. Summary; the vote for unworkable socialism comprises a stupid element (the right-wing workers) and the undeniably more intelligent tactical vote from the lazy-arsed left.

As for the racist charge I think you’ll find that left or right, poorer people do tend to be racist because it’s a survival response, entirely natural and seen in every culture throughout the globe, where competition for resources rewards tribalistic cooperation.

But nonetheless we are talking about the vast majority of the population, remember, those who are below median intelligence. (Which, incidentally, is why one-man, one-vote democracy is so inherently flawed)

At the top end of the scale there are also two types of ‘intelligent’. Those on the right tend to make money, power the economy, employ people and generally get things moving. They usually have to spend many years repeatedly doing the same things correctly to become successful and frequently have to fight their corner to survive and thrive.

Those on the left tend to think more, make pretty things and spend a lot of time being highly visible; on film, in print, on TV, in galleries, on stage…. Traditionally, art and ‘higher’ culture has been supported by patronage or popularity and its practitioners opportunistically thrive on fashion and fad. While some have long-lived careers due to undeniable talent, many more make their living by dint of a remarkably small body of work of often intangible, often short-term value. Denying a banker his windfall bonus, many will happily fund their own lifestyle from the happy accident of a best-seller or a three-movie film career. Or an inheritance.

The right do not need the left, but tolerate the existence of them insofar as they make life more entertaining and less brutal. The left, however, do need the right, as without enterprise nobody gets to eat lunch. In other words, rich or poor, the right exhibits the traits of a species bent on maintaining the daily struggle to survive and occasionally prosper, while the left exhibits many of the characteristics of a parasite.

So, what is more intelligent? To work hard, keep your nose clean and make hard choices, or to indulge yourself and live off the endeavours of others? 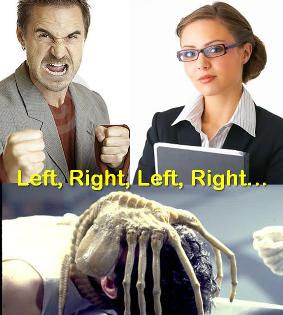 Who occupies the fucking moral high ground now?
Posted by Batsby at 13:44