I should be so lucky

People ask me how I've survived to this grand old age (I'm not telling - a gentleman never reveals such personal statistics) and I fix them with a gimlet eye and exclaim, "Pah! You don't know the half of it!" And then I send them on their way with a stiff clip around the ear for their impertinence.

I've roamed this world from age to age and met many a companionable chum, all of whom benefited greatly from my sage advice. I was an early confidant of Isambard Kingdom Brunel and although modesty restrains me from taking the shine off the great man, it was my suggestion that he name that ship Great Britain, rather than Saucy Sue, the name he favoured after a short and embarrassing dalliance with one of the old Queen's ladies-in-waiting.

I've no doubt young Marconi would have eventually got around to sorting out radio communication, but when I met him he was still dabbling with tin cans and string. I doubt very much that Vodafone would be the force it is today without my timely intervention, for which I ask and will accept no thanks. As I always say, modesty is a prince among the virtues and rare indeed.

I have been prescient, also, in influencing the outcome of many diverse encounters that have moulded the world in which we live. I warned my old pal Neville Chamberlain about consorting with that shady cove, Mr Hitler, but would he listen? It is only thanks to my wizard idea to get America involved that we're not all "speaka-de-Nazi" to this day. As to Maggie and the miners, well, I hesitate to take the credit while the dear lady is still alive but, as they say, if the cap fits, what? And do you believe Christopher Plummer would have been given that Oscar had I not had a word with the award committee? No, I think not.

So, all in all, it's been a pretty busy life all round, forsaking personal gratification for the greater good, but I merely seek to serve. I've travelled the globe, shaping world events spanning three centuries and apart from that nasty business in seventy-four, I've pretty much kept myself out of trouble. My friends call me Lucky. 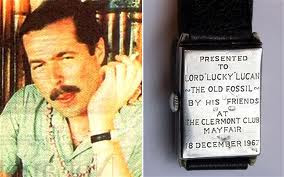