The Christmas Present (A short story)

He laboured on the wheel. A treadmill built to fit, he walked it day in and day out. He walked because humans can and because the wheel turned a turbine, which generated electricity and all the while he walked he had light. Sometimes, if he worked a bit harder, he also had television. It had taken him two days to create the light and another week to discover the screen, which flickered just out of his reach. He couldn't reach it because the harness restrained him. It stopped him falling and it stopped him from stopping.

Kyle was wide awake and bouncing, bouncing, shouting... shrieking. Kyle was really annoying; all his life had been an entreaty for this, a demand for that. Demands that were satisfied because to enter into a battle of wills with Kyle was, as his parents had soon discovered, to enter a conflict they could not hope to win. Winning the war not an option, to win the peace they made a meek show of protest then obeyed Kyle’s whims. Parents everywhere daily lost this battle.

As long as he walked he was rewarded with a world of light and sound and vision and he had done this for so long now it was his life. He'd been here... how long? The television never showed him the now world, only an older world of learning and occasionally, irregularly, entertainment. And he was entertained enough to keep on walking. Anything was better than the dark. 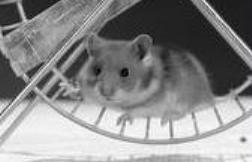 Kyle's pleas were nearing the crescendo both he and his parents recognised. The climax to their daily congress came when he had made just the right amount of the right kind of noise and they had tolerated it for just long enough. The peak was a capitulation which made them feel they'd made a stand and let Kyle know just how much in charge he really was. Tomorrow was Christmas Eve, the last important day of Kyle’s year; another day to shop.

Nearly a year he'd been walking, going nowhere, but growing and learning. A display on the wall counted the days. 363. At first he'd resisted. He’d woken up in the harness and screamed. In fear and in anger he'd kicked out and yelled. And then he’d huddled-up and alternately sulked and shouted until he was hoarse and cold and hungry. Eventually he learned that if he was quiet he would be fed and that if he worked life became more bearable.

The cold, shiny plane of the shopping mall floor stretched out beneath their feet and Kyle’s staccato curses bounced back at them from the hard surface. “Bastard! Bastard!” he experimented, “Bastards!” He liked the way the Bs reverberated a little longer as the sibilants whispered away to nothing. His grim-faced parents stared straight ahead, clung to either hand and steered him down the aisle. It was Christmas Eve and everybody deserved a present at Christmas. “Twats!” shouted Kyle.

After a while he accepted his fate and longed to wake up in the mornings. He looked forward to the day and he woke up to walk; to work and to learn. All the while he was growing stronger and although he couldn't find the words, he was feeling more at ease, more content than ever before. He felt as if he was finally ready for something. The television screen suddenly blazed, but today it was different. He recognised the people on the screen. He knew them. They called his name; it was so long since he’d heard his name. The counter said 364 and the call of his name coincided with a soft sigh as the number became 365 and the wall slid away. “Mum!” he said, “Dad!” His heart swelled with recognition and love as the harness fastenings clicked open and he returned to the world. Corrected, mended... fixed.

Kyle groggily opened his eyes on Christmas morning, his mind full of greedy thoughts. But when he tried to move he found himself restrained. The room was in darkness, but soon a dim light revealed the truth. Strapped into the harness, Kyle began to scream.
Posted by Batsby at 07:12