So, the nativity players for the Sure Start toddler group in York have had their horoscope read and been advised that their star sign is in fact the sign of the crotch? I laughed my cock off. Whatever next? 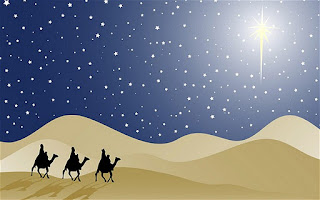 Well, let it never be said that the United Dingdom has a killjoy mentality. This year  in the spirit of diversity, inclusivity and egalitarianism, our Nativity story sets out to offend everybody in equal measure.

A long, long time ago in the town of Nottingham an under-aged girl called Mazza was up the duff by her dyslexic, learning-impaired boyfriend's dad, Doug. Doug told her to keep it quiet because "you know what people are like" but, soon enough her condition started to show and the nosey social worker, Harold King, started to ask awkward questions.

So Doug told his lad, Jezzer - who, was supposed to be on a joinery apprenticeship but was getting laid off for being an idle sod - to nick some wheels, hoof it down to Birmingham, where they didn't ask these sort of questions and get themselves on the housing list. "Tell her to wear a teatowel on her head," he advised, "they'll let you jump the queue. Blue would look nice." He winked at Mazza and made the sign of, "don't you dare tell a  fucking soul, right?"

So Jezzer twocced a random Beemer off some bloke who, "could prolly afford it, right?" and they legged it out of the reach of Harold King, down to Birmingham where nobody in social services knew them from Adam. At 'The Housing', Jezzer left Mazza to get herself on the list while he went off to nick a few cans of Stella - it was nearly Christmas after all and what's the point of celebrating Santa's birthday if you can't get lagered up and start a fight, eh? Besides, Mazza had let herself go lately, putting on a bit of weight and Jezzer needed a few inside him before he fancied it, you kno wot I mean, right?

A few hours later and getting well bevvied, Jezza met up with Mazza round the back of Aldi and they had a bit of a  party with the Irish Travellers who had rocked up and taken over the car park. By the light of the nicked electricity, they partied until dawn, when Mazza suddenly felt sick. "I feel sick" she opined and went in search of a place to chuck.

"You got a toilet in there, mate?" she said to one of the caravan owners. But he wasn't happy to let her use it because the trailer was full of seventeen members of his own family. It was the same story at 'van after 'van and now Mazza and Jezzer were getting a bit desperate. "There's a skip over there," pointed out one traveller, "now eff off out of it!"

So Mazza and Jezzer made their way to the skip and Jezzer helped her onto the old mattress where she lay, bits of straw in her hair, panting ten-to-the-dozen. "Well go on, Mazz" said Jezzer, "get it over with." The travellers gathered, some bearing stolen goods, to watch as Mazza strained under the glare of the only carpark light left unvandalised. She bent over and pushed and pushed and then, suddenly, a bab popped out.

"Fuck me!" said a traveller and offered her a can of Special Brew
"Blimey, you don't see that every day!" said another, "have a toke on this."
A third said, wisely, "Here's a few quid, you'll want to get some breakfast after that."

Jezzer had fallen silent. Like his father - although Doug wasn't his real dad - he was bit on the simple side and struggled to form sentences. He gazed down at the scene; Mazza with her blue teatowel on her head, necking Special Brew, sucking on a joint and cradling a baby. "Jesus!" he said.
Posted by Batsby at 06:28