Windmills out of your mind

I watched Chris Huhne on The Politics Show yesterday. I wish I hadn't. He was talking about building another fourteen billion wind turbines, this time on Dogger Bank.

As it stands, many of our offshore wind farms are German owned and the subsidies for the eleven kilowatt-hours they generate each year also go offshore, that is off our shores. At least the ones on the West of the UK generate some income for British companies - local services to cater to the needs of the East Europeans drafted in to build and maintain the evil robots. But, Dogger Bank?

Let me consider this for a moment. German-owned structures placed in the North Sea between Germany and Britain. The same strategic sea area that Fisher, Beatty and Jellicoe fought so bitterly to keep out of the Kaiser's control. This time, however, there need be no British involvement in the placement of these political and economic forward command posts other than to pay for and keep on paying for the mistakes. This time there will be no Battle of Jutland. We're already sunk. 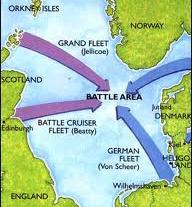 The enormous white elephant that is the British green power policy will bankrupt us if it carries on like this. In the meantime, forget your country; it isn't yours any more. But you can all of you, individually, do your bit to help yourselves. I offer a list:

Insulate your house properly.
Don't run the heating where and when it's not being used.
Turn down your thermostat and wear more clothes.
Lights! Turn the bloody lights off.
Have shorter showers.
Walk, don't drive.
Don't buy food you're going to waste.
Don't buy any other shit you're not going to use
Watch re-runs of The Good Life, if only for Felicity Kendal's sake.
Sell a couple of your kids.
Put the rest of them to work, tatting - those nimble little fingers should not stay idle.

You can also pro-actively engage those who won't play the game. Boo and hiss those be-tattooed chavs who pitch up in taxis at the supermarket wearing shorts - you know they have just stepped out of a council vivarium to squander your money on the legal drugs of booze, fags and fat. Go through their bins and post any uneaten food back through their letter boxes - that chicken carcass would make a nice stock.

At school, make the fat kids huddle into an insulating cordon round your, normal, kids to keep 'em warm. Re-introduce the winter cross-country; if you make an effort you warm up naturally, if you don't you at least appreciate the meagre warmth of your unheated classrooms.

In fact, the solution to the energy crisis is quite simple; turn the clocks back. All the way back. To the nineteen-fifties, if needs be.
Posted by Batsby at 09:42