The air is thick and damp, heavy with menace and lit by a sodium gloom which casts deep shadows into crevices inhabited by the population of the night. Night brings out the dark people, those for whom daylight is too big a risk.

At night the facial recognition cameras, the technology of law and order function less well. Deep contrasts and faces half-concealed by hoods work to foil the computers and throw up ambiguity and confusion. And ambiguity is a thief of time, time left behind, not enough in the race to identify the bearer of a face.

In the high contrast, near-monochrome world it is not only lack of light that aids and abets wrongdoing. Sounds clatter from surface to surface, unabsorbed by clothed masses going about their businesses. Sounds from afar come near and soft treads in the nearby shadows echo from far-off walls.

The night hides terrors and all those who fear are off the streets before the evening’s entertainment begins. As the last buses and trams and trains clatter away from city centres the cloak of night embraces all and eerie mists arise, steaming from stranded pavements. Cobbles gleam yellow in the damp embrace of the early hours.

Too early for work, too late for play, the night’s foreplay begins with a shuffle here, a footfall there. Fragmented sounds and movement betray little of intent. That’s the way we like it. At night we are all anonymous and unreadable.

A shift in the shadows, an outbreak of footsteps and the smash of a window is followed by silence. The night floods around that silence, holding its breath. No response… then a sudden cacophony of smashing and grabbing, running and hiding. The deed done.

The police headquarters are surrounded by night; officers huddled inside strain their eyes at gloomy monitors. Too few in number to patrol effectively, they are dependent on the technology; the same technology that will let them down with the CPS. Too vague an image, too few fingerprint points, inconclusive DNA... the criminal walks free, as certain of the justice of his release as the police are of his guilt.

Deny everything, refuse to make a statement, don’t grass. The criminal mantra is easy to follow - it takes no effort, just as they have made no effort to live a decent life. And society is so tolerant, so determined to be good, so concerned to not make mistakes, that society makes mistakes in justice every single day.

Violent criminals convicted multiple times get no more than words. Fines are unpaid and that crime in turn is punished by more fines that will also never be paid. Community work orders are ignored, curfews unobserved, tags removed with impunity. And against this impossible backdrop the police struggle to contain criminality within too-lax bounds, forever criticised by those they are supposed to protect, forever thwarted by a criminal justice system that is exactly what it sounds like; justice for the criminal.

Collar number 2451 treads softly through the night, his radio silenced, his breathing stilled to a shallow, steady flow. Ahead of him, arm raised, brick in hand, Derek, a known felon approaches a chemist’s window, intent on the narcotic haul he imagines he will both find and understand inside. There are no drugs, nothing at least which will net him any real profit to fund his own habit, but he’s doing it anyway; it’s just another habit. Along with sleeping until noon, spending the day in night clothes, eating brown, fried food and smoking continuously.

He could no more not go on the rob than he could turn off the TV in daytime; the always-on accompaniment to his life, a goggle-box displaying events and images he will incorporate into his own memory as if they were real. In court he relies on the scripted pleas that he is a prisoner of his own wrongdoing, that he wants to follow his dream; that he is, at heart a decent, law-abiding, misunderstood member of an oppressed society. That he is one of society’s oppressors would surprise him, so far has he swallowed the social-workers’ delusions about the basic decency of humanity.

2451 knows different. He knows that the feral scum before him is a kind of vermin. He is representative of an underclass fuelled by a sense of righteous entitlement. A parasite that needs to be isolated from its host and crushed.

Human nature is survivalist. In large measure humans survive in numbers and in bigger numbers they thrive still more. But the natural borders of a society have long been exceeded and the 150-some-strong settlements of the Iron Age have blossomed into thousands, millions, within which rigid rules need to be enforced. Only, as humans have grown fat and lazy in their easy existences they have become complacent as well. Unwilling to face facts, unable any more to stomach the actions necessary to curb the excesses that threaten harmony.

Early police forces, known to the whole parish, herded errant people back along the straight and narrow, the laws defined by those who followed them. Stray from the path, get a warning, do it again, get a punishment. But now the police are so far removed from the societies they strive to control - indeed they MUST be for fear of reprisals - that they can only be seen as an outside force. Those whose taxes pay for them demand ever-more effective control; those who are supposedly controlled seek any way to escape their punishments.

And because the law-makers are just as corrupted by their insular upbringing and disproportionate rewards, they suffer none of the hardships of those wronged-against. They cannot see what those on the streets see, that human beings are NOT equal, they are NOT all equally deserving and they are NOT going to stop behaving badly because of a few harsh words.

Words have never done anything to control wrongdoers beyond the school gates. A timely intervention by a stern teacher may have prevented a basically good kid from going off the rails, but for those who are parented by television, a repeated affirmation of their rights has dulled any memory of words.

Only punishment is effective and 2451 has the means and the opportunity at his disposal. As Derek brings back his arm to heft the brick, 2451 catches it and catches him off balance. As Derek stumbles he has a brief moment to see the face of his assailant. “Awright, mate?” he offers, expecting to be released with a caution, ready to offer a plea of innocence. But he sees something in the eyes of this familiar face. Something entirely unfamiliar.

It is the last thing he does see, as the Taser renders him insensible. Moments later 2451 tidies up the scene and makes his exit, the supine form of Derek concealed in the shadows, his dark soul draining into the road, making yellow-lit islands of cobbles in a black sea of blood.

Neat and tidy, a crime prevented, a criminal neutralised; a case that will not be investigated beyond the inevitable family outcry. The press conference at which the bereaved family will mourn their lovely boy, their shining star and their gift to the world with so much potential they did not see any need to bring him up decently. The right political noises will be made, the acceptable number of doors knocked upon until the next case steps into the light and allows this one to be quietly buried.

One at a time, thinks 2451, one at a time. It’s the best he can do, but he knows he is not alone. Out there are many individuals doing the same thing - taking out the trash. Police, private citizens, other criminals. Bit by bit the undesirable elements of the world are being eliminated. A good job, well done.

He makes it to the police station in time to start his shift. In an hour or so he will alert a foot patrol to something not quite right, seen on CCTV, could you investigate? 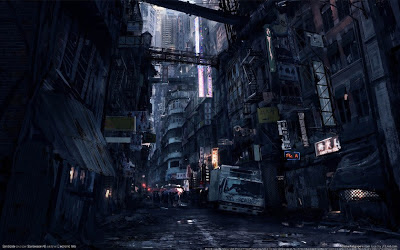 The foot patrol will call an ambulance, the body will be removed to a hospital morgue and a host of people will be gainfully employed at no risk to themselves. No crime will be detected and solved, no lawyers will get paid. 2451 is cutting out the poisonous legal middle man and putting society back on the rails. For which he will receive no thanks, earn no accolades. Just the satisfaction of knowing he has done his bit.

The night mists reclaim the scene and the world carries on. One scumbag down.