Let’s look at the facts – or failing that, let’s leap to a few conclusions. First, Jimmy Savile seems to have been a right wrong ‘un. Quickly thereafter the Feds knock on the door of the nation’s favourite go-to paedo, Gary “do-you-wanna-be-in-my-gang” Glitter and before you know it, nature-lover Freddie Starr is engaging lawyers.

Bloody hell, we thought, who knew? Then the whispers… John Peel and his ‘Schoolgirl of the Year’ competition and of course the BBC (who in the main appear to have employed or otherwise paid lots of dosh to the majority of the accused) gleefully touted the unsubstantiated ‘Tory-peer-who-shall-remain-nameless-but-it-was HIM’ story. In the oh-so-apt Twitter phrase, *facepalm*.

And now, just as it seemed to be settling down, The Hairy Cornflake, Dave Lee Travis is having his collar felt and all of a sudden it’s the Seventies in flashback. Flowers, flares and fanny could have been the mantra of the post-pirate DJs and ‘popsters’. Jonathan King had some sort of fling, around the time Chuck Berry was singing about his ding-a-ling.

Aargh, I need mind bleach! It’s everywhere! Every famous person I remember from my childhood is in the frame. If I was Simon Bates, or Mike Read, or Noel Edmonds, I’d be getting out the Cillit Bang and making sure all my records were scrupulously clean. (I’m betting David ‘Kid’ Jensen is starting to regret that chirpy nickname now.)

And what of poor old ‘Whispering’ Bob Harris… Even as I say his name – and, dear God, please don’t let this be true – you can’t help yourself imagining a dark room, a hand on the shoulder and a gentle “don’t worry, I won’t hurt you…” before a new talent is subjected to the Old Grey Whistle Test.

In the Seventies (thanks, Marilyn French) all men were declared rapists. In the Noughteens (I'm baggsying that word) we’re all paedophiles, guilty whether innocent or not. Careers will be wrecked and reputations ruined as this most emotive of accusations turns good lives bad and idols into monsters. Once you pin on the paedo badge you’ve branded somebody for life. 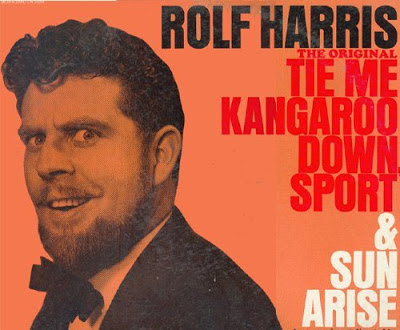 So what can we expect over the weekend? Were you paid by the BBC in the seventies? Have you ever had a hit record? Did you appear on Top of the Pops? Have you ever presented a show in which children were featured? If I was Rolf Harris I’d really be shitting myself right now… If only those Two Little Boys could talk?
Posted by Batsby at 00:06