I saw a lot of bleating again today, from various quarters about 'nasty vicious Tory cuts'. Would those same people have complained of nasty vicious Labour cuts had Ed financially-illiterate Balls been making them, as he undoubtedly would have had to? I somehow doubt it, as the socialist hate rhetoric only applies to approved targets based on labels promulgated via some pretty smug propaganda. Where, for instance, is the deserved righteous lefty hatred that should be levelled at twice disgraced Peter (Lord, note) Mandelson who last year  bought an eight million pound house? Power to the people indeed.

You won't hear it because Labour have perfected the Orwellian art of 'doublethink' the ability to hold two contrary views at the same time. Thus, all Tories are bad because they make money and have cronies in the House of Lords, but when one of Labour's own attains high office and literally lords it over the rest of us, that is somehow acceptable. Or taxpayers must be squeezed till the pips squeak but taxpayers with children are better than the rest of us and must be given some money back.

This is dangerous territory, but I'd argue that those with children should pay more tax... or at least get no state assistance in raising them. Or, if that is unpalatable - which it will be - that I should get both Child Benefit and Working Families' Tax Credit. But, but, but... you'll splutter, we need that money to help raise children for your benefit. Well, if that were true, how come all the low end jobs, the ones that actually shore up a large part of the economy, are mostly taken by the tide of immigrant workers?

Your kids that gain no useful qualifications won't be wiping my arse when I'm eighty and your kids that get good grades will bugger off and work abroad, given half a chance, if the UK continues on its arse-ride to EU federal oblivion. At the very least, if they are successful, they will employ accountants to minimise their tax burden. So I'm not paying tax to maintain a healthy population top-up at all; I'm paying - the bit of it that you get back in benefits - for no useful purpose whatsoever. One way or another your kids are an investment on which the country is never likely to reap dividends. On top of that I pay for schools, roads, local services, healthcare and the like, all of which I use far less of than you breeders

Allowing unchecked immigration let the previous government suppress wages and opportunities for your young Britons while at the same time buying your silence and capitulation by showering on you the fruits of their magic money tree... until the bubble burst. It's effectively outsourced our breeding and rearing department. Now you want the state - that is, me - to keep paying you a stipend for something I already pay for anyway. That's like outsourcing your HR department, but not sacking your current in-house staff. 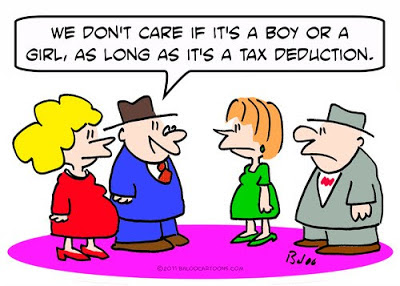 So, parents, it appears you are politically redundant so you can do your bit to help the country by giving up the bribe that no longer serves a purpose. Take one for the team and give it back, or let me have it as well. It's only fair.
Posted by Batsby at 06:22