At the end of our Teather?

Over the weekend a former minister condemned Government plans to cap household benefits at £500-a-week as 'immoral'. Sour-faced Libdem, Sarah Teather, accused the government of seeking to 'gain popularity at the expense of children's lives', claiming it as a purely political ploy to pit one class against another, or some such whining drivel. Ah, that would be the popular political ploy of bringing the ickle children into your argument, would it?

“But what about the child?” is the policy discussion equivalent of Godwin’s Law. As soon as you mention the little fascist, you have lost the argument just as surely as if you’d said “Hitler”. The kids are collateral damage in the war between granting freedom to individuals and then restricting what individuals will do to demonstrate that they don’t deserve such freedom. The children are not relevant here. They’re really not.

What is relevant is the whole way our society is structured. Some people work long hours in demanding jobs for little monetary reward. Some earn colossal salaries by dint of specialist knowledge. A lucky few inherit their living. But most of us would hope to be able to earn a living wage for a fair sacrifice of our time and talents; anybody objecting to that would surely find it hard to argue a realistic and reasonable alternative. By our joint endeavours and by our contributions to the communal pot we should be able to also help those less fortunate and run our society fairly with a bit put by for a rainy day.

Of course, there will always be a small number who will take what they want without regard for the rightful owners’ losses, but those people are called criminals and we generally frown on them, censure them, penalise them and ultimately lock them up. Depriving somebody of their hard-earned possessions is considered wrong from almost any perspective and rightly so.

I would have left it there, except, on Petrie Hosken’s show on LBC973 on Sunday afternoon, there were callers who argued that Ms Teather was right and that it was, indeed, ‘immoral’ to consider limiting the amount of unearned benefit a family could claim to a level higher than a majority of ordinary, full-time workers could ever dream of earning. What? Has the country gone stark, staring mad? (Don’t answer, it was rhetorical; of course it has. The UK lost its plot many years ago.)

But what we should be getting mad about isn't the idea of a benefit cap – there HAS to be a limit - but that such a high ceiling of benefits are being paid not to those who have fallen on hard times, not to those who need a helping hand to get back to work, but in the main to the least employable in society; those who could never command more than the minimum wage and yet have been allowed to breed uncontrolled an entire class of citizen who in turn will never work.

What’s to do? Well, I reckon two birds, one stone. Teather says we are at risk of demonising them; I say criminalise them. As many of them have subsisted all their lives on benefits – always taking and never contributing, never considering the losses of their victims, the tax-payers, they can be considered by any objective measure as thieves. And as a large part of the cost of their upkeep is housing way beyond their worth, we can redress all the wrongs by bringing back the work house. 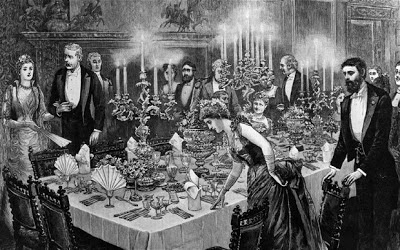 Sorry love, the foie gras is off. Damned cuts!