The job of opposition isn't easy... What am I saying - it's a piece of piss! You just run interference and endless criticism. Your job is to discredit the current government, whose job in turn is to prove you wrong and stay in office long enough to actually do anything useful; being slung out after one term is pretty much the worst thing that can happen to any administration because it looks like you were ineffective.

Of course, the usual sequence is one or two terms of relative contentment, followed by a final term where cockiness, sloppiness and a general wearing out of your welcome lets different policies appear appealing to new voters. This leads to electoral defeat and a term or so of jeering from the sidelines while the other lot blame it all on you, reverse your policies and set the whole thing on the opposite swing. Left-right, left-right... but now the choice is only between between left and further left. No wonder UKIP smells like a breath of fresh air.

The government is giving it a go, but with so little money left in the pot it's going to be an uphill struggle all the way. The news that IDS's scheme to get 'neets' into work for more than 6 months hasn't met its targets has naturally been met with derisory sneers by the party that spent all the money in the first place. It's almost as if Gordon Brown's role in the last Labour government was to screw up the economy as far as it could possibly be screwed. As if, because Labour weren't to rule the country any more they'd be fucked if they'd give anybody else a fighting chance. That's politics.

And it's where all socialist cycles bring us. It starts from noble beginnings; the working man, heavily exploited by ruthless mill/pit/foundry/shipyard owners from a bygone age of good old Christian brutality of man towards man, downs his tools, links arms and stands side by side with his fellow. They call each other 'comrade', for this is a war and the enemy are clearly defined. The have-nots versus the haves.

By the 1970s the Trades Unions, Labour's paymasters,  were calling the shots and crippling the country through ruinous restrictive working practices. Enforcing employment by double-manning, working to rule and threatening strike action at the drop of a flat cap. Destroying those very industries while imagining they were defending them. Those who weren't there have no idea how much they owe to the sainted Mrs Thatcher. (And repeatedly reciting, "Fatcha ruined vis cuntry" is a cast-iron indicator that you haven't a clue.)

But it's a war, remember? It's always a war and in war there are casualties and Labour can bear much of the blame. In ennobling the manual worker they were instrumental in building whole towns out of single industries and closing their minds to what might happen when the resources ran out. When those industries became bloated and inefficient and uneconomic, instead of looking to diversify, to educate, to broaden, they simply threw money at the problem and shored up a client state.

When the last Conservative administration fell out of favour the bright young Socialist things had a new messiah in the form of Tony Blair, who reaped the benefit of anti-Thatcherite rhetoric spewed from hateful mouths. With no big industries left, but with a booming economy, built on the back of taxing an entrepreneurialism that wasn't possible in the seventies, Labour set about building a new client base, opening the borders while driving their core supporters out of work and onto benefits. 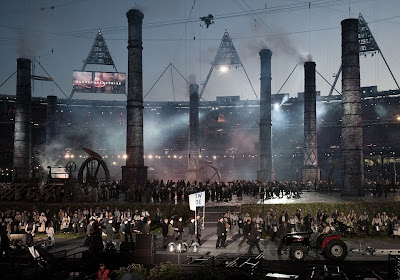 Labour didn't build this; they tore it down.

If they can't hack coal, they can at least stay at home and do drugs and drink and watch Jeremy Kyle and jeer at their own. Always the same story - throw public money at dodging the issue, rather than attempting to solve it. So now it's a bit rich that Two-Eds-is-worse-than-one is heaping opprobrium on the current administration for throwing money at actual job creation, instead of Labour's traditional job-stifling practice.

It must be a more noble aim, but it hasn't gone well; getting the unemployable into work was never going to be easy, but Iain Duncan Smith has a far more comprehensive understanding of the problem than ever displayed by the Reds and let's hope he has the backbone and the time to see his reforms through.