So, the latest to take a tumble off the PR cliff edge that is the widening "Jim'll Really Fix You" sex abuse case is the publicist Max Clifford; now more famous than many of his former clients. An arch proponent of the 'kiss-and-tell' news story - and how apt is that description now? - Clifford first sprang into the national consciousness with the lurid but untrue, "Freddie Starr Ate My Hamster" headline. (Freddie Starr, oh dear...)

Since then he has launched, re-launched or buried careers and been involved in spinning or concealing the activities of such well-loved and reputable public figures as Pamella Bordes, Mohammed Al-Fayed, David Mellor, Derek Hatton, Rebecca Loos, Jade Goody, Doctor Gillian McKeith (or, as Ben Goldacre said, "to give her full title, Gillian McKeith") and John Prescott's secretary, Tracey Temple.

Through a combination of publicity stunts, cover-ups, smoke, mirrors, distractions and outright lies he has made a highly lucrative living as the person you would least like to share a secret with. So it makes you wonder where this latest outing in front of the press cameras is leading. 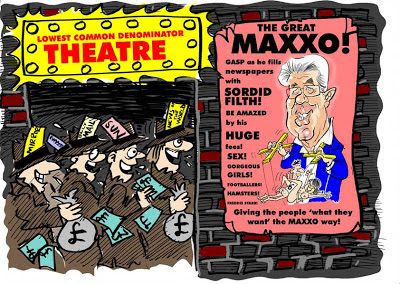 Given his calling and his track record, if I was the police I wouldn't believe a word of it.
Posted by Batsby at 06:46