With both Keith Vaz and Morrissey on your side you know you're in trouble. And whatever your attitude to royalty, Mozzer's latest incoherent rant does little to endear him to well, anybody with a pulse, really. The phrase 'much maligned' is often applied in the defence of somebody who means well but who has issued a rash statement, or been caught in an ill-considered action, but Morrissey is much maligned simply because he's a malignant little shit.

He’s a jumped up pantry boy, with conflicting attitudes toward everything from race to religion to even his own apparent sexuality, which opinions are nevertheless pure gold in his eyes, so I thought I’d immortalise him in a 'pome'. Obviously the form of poetry that best suits the undertaking has to be a Limerick... of sorts... to be sung to the tune of 'This Charming Man' because it scans just as well as the original.

There once was a knobhead called Morrissey
Who might be an old friend of Dorothy
His songs are as bad
As the rhymes in this ode
And he’s a fat bitter twat what’s more, y’see?

(Pam Ayres eat your heart out!) 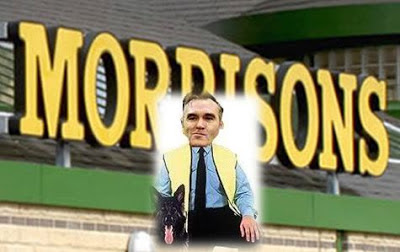 I still get him confused with that supermarket.