So, an interesting evening's fun on The Twitter last night as I was gently gummed by a pair of caring lefty-types eager to berate me for being a Fascist monster intent on eating babies. It's a fair point that I'm not a fan of mewling, puking  rug rats, but I've never eaten a whole one.

It all started out as one of my playmates complained about having been to Tesco and encountering what she saw as the jaw-dropping hypocrisy of their support for food banks. Maybe they should have considered this before participating in the heinous practice of Workfare, went her wail, to which I responded that the two were entirely unrelated.

I was called several unpleasant names and my entire reason and right to existence were questioned but, to be fair I did respond in hysterically ranty terms by suggesting she had a naive grasp of the situation as may befit, say, a socialist. This grossly unfair slur on my part was taken in poor humour as another joined the fray and I became a eugenecist and an unfit human, yada, yada, yada...

But here's the thing. Far from being slave labour, workfare involves companies in all sorts of financial risks from the deployment of untrained staff. Resentful, surly youths are unappealing in a visible, front-of-house role, while teenage lads trundling trains of trolleys into parked cars are hardly a great advert for your enterprise. The unreliability of those with no work ethic can cause logistical headaches and the lack of gratitude for the opportunities afforded can be astonishing.

In my business - electrics - the taking on of an apprentice is fraught with uncertainty. Many youngsters these days have no idea how to behave with customers and see the imposition of work into their formerly fully-catered lives as some form of punishment for having been born. Taking on an unskilled worker is a risky business expense with any prospective returns occurring only a long way in the future; I have met many small business owners who have forgone the practice after seeing what a thankless task it can be.

Not so many generations ago the apprentice's father paid the master for the privilege of learning a trade, not least because an apprentice slows you down while simultaneously foisting his cack-handedness on your innocent customers, who may not thank you for it. Now, not only is a business expected to pay a wage, but you also somehow believe them to have an ethical role in society. 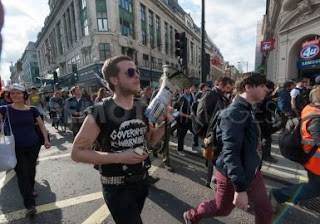 What do we want? Not too much work!

So, listen; the only ethical concern a business has is to its owners. If you don't like the way Tesco plays then don't shop there, but at least recognise that in taking on your idle, worthless spawn without charging you for the training, they are actually doing us all a favour. Now, excuse me, I have to go to work to pay taxes so that you can sit on your sofa and be outraged at my horrific right-wing stances.
Posted by Batsby at 06:43