The famously tolerant Dutch are discussing the creation of scum villages. Just as I proposed the walling up of illegal travellers' settlements (if they don't want to travel they can bloody well forcibly stay on site forever) they are suggesting the removal and incarceration of nuisance neighbours in makeshift 'punishment housing camps'.

Before you leap to the conclusion that this is the fiendish scheme of some far-right lunatic, it is Amsterdam's Labour mayor who has complained that the long-term harassment of law abiding council tenants needs to be aggressively curtailed. He is quoted as saying, "This is the world turned upside down," and "Repeat offenders should be forcibly removed from their neighbourhood and sent to a village for scum... Put all the trash together."

For too long our system of law and social justice has appeared to serve the criminal rather than the victim. Far from Owen Jones' imagined 'demonisation' of working people, this is a very real problem and the chav scum at the heart of every sink estate need to be taken on, or taken out. Instead we provide them with incentive after incentive to piss all over everybody's chips and they laugh in the face of authority while picking its pockets.

The problem is going to get worse too, because very soon we will face an unquantified and apparently unstoppable invasion by Romanian and Bulgarian immigrants intent on sucking the public purse drier than ten-year old Bombay duck hung out on the south side of a pyramid. They are coming and they'll need to be housed... if we build the chav camps at least we'll have 'ethnically appropriate' accommodation all ready for them.

And snipers, of course. The cornerstone of my proposals for tackling the population and social problems, we could deploy watchtowers and snipers, for what else is a foreign invasion than war by another name? And if there's one thing we're good at in Britain it's war. We've taken them all on in the past and emerged victorious but this European sham has made us drop our guard and many British towns are already under siege from hordes of foreign marauders.

But we're missing  trick here, surely? Why wait until they land and then deal with the bothersome business of food and shelter? Why not pluck them from the high seas and pack them all into prison hulks offshore? Or even better, deploy Lord Palmerston's Follies once again in the service of defending our borders. 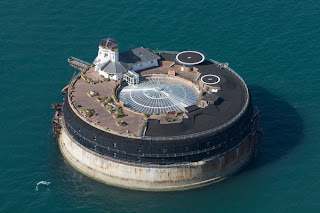 Or sod it. Why not open the borders completely and let them all in while we fuck off and take over somebody else's land? I hear Gaza's very nice this time of year...