We all do our bit for the environment, don’t we? Well, sod the environment; good citizens all, we should moderate our reliance on imported fuel use, if not for the planet then for the simple common sense of it. Has nobody been listening these past few years? Are you not aware that the country is broke? According to the Express, one in three will be too poor to buy sufficient heating for winter within the next two years.

While I don’t buy their scaremongering figures for one moment, I certainly agree something needs to be done. And it won’t be the Green Deal, which will turn out to be yet another well-intentioned government scheme that ends up benefitting large businesses with access to capital before being consigned to history when the money runs out, like all the others.

It’s just tinkering at the margins in pursuit of political ambitions instead of getting a grip on the real issues. And for the few who genuinely benefit it always costs the tax payer dear while keeping them potless.(That will make it all the easier for the rampaging Muslim marauders to finally gain the majority hand – George Galloway’s is a patient, long-term treachery, be warned.)

As a nation what we need is to make or save money and whatever god you don’t believe in, Nigel Lawson reckons shale gas and oil is a gift from him. To become self-sufficient in, nay a net exporter of fuel, would be all that we need to be back in the game. And if that is good news then reports that the Blackpool shale deposits in the Bowland Basin could be fifty percent larger than first thought has to be even greater news.

We could kick out the unwelcome ‘economic migrants’, get our own industries working and our idle off their arses and off welfare. We could fuck off the German wind farms and say so-long to pointless solar PV and get Britain back on its feet again. And as for the fears of the Green-Meanies, do they not realise that an earthquake in the area would cause millions of pounds-worth of improvements to Blackpool?

Even Environment Minister, Owen Patterson, says the same. “invest in shale gas, which doesn't require public subsidy, unlike wind farms.” The coalition must, as a matter of utmost urgency, pursue what could be the saving of our once independent nation from the threats that currently threaten to overwhelm it. Social politics, white flight, brain drain, the deficit and the disastrous involvement with the EU. But it may already be too late. Those greedy burghers at the Stasi are already seeing power slip from their grasp and are demanding a slice of the action. 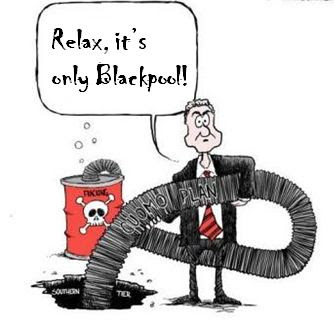 What am I saying, a slice? No, like all the other European gangsters flooding the country, they intend to take control altogether. Well I say we tell em’ to frack off.

And so does Boris Johnson.
Posted by Batsby at 08:20