So, yesterday, the hated beloved Eurocracy picked up the Nobel prize for tyranny, I mean peace. Can that actually be true? What is going on? Are we playing Opposites Year? So, Animal Farm style, it’s now democracy bad, tyranny good, eh? I think I’m beginning to get the hang of this.

Hitler was nominated for the Nobel Peace Prize in 1939, as a satirical joke some say, but then Stalin had two nominations, in 1945 & 1948, so who was kidding who? It would appear that some forms of submission to government control of absolutely everything are okay, just not Adolf’s version; and he worked hard on that bloody book.

In its contribution to “peace and reconciliation, democracy and human rights” in Europe the EU has stood by to allow the free expression of dissent in the form of anti-governmental riots across many member states. You don't like your government? Then all is well, because the EU will remove it altogether. The display of Nazi insignia to greet Angela Merkel in Greece was a wonderful way to remind the proles just how much peace they've had for so long. And that peace doesn't come cheap.

In the name of peace entire nations have been ‘requested’ to vote again on referendum outcomes that were not conducive to the European Project. These words have passed into notoriety; ”Europe's nations should be guided towards the super-state without their people understanding what is happening.“ (Jean Monnet, founding father of the EU, April 1952) They are said not to be Monnet's direct words, but an accurate interpretation of his clear intentions; a voice from a troubled past maybe, but the current troika fully intend to apply more of the same.

To be fair, when the subject of a referendum arises it must be very difficult to phrase the questions just so, in order to get the correct answer. I mean, how ridiculous to ask simply IN or OUT? Some voters might be terribly silly and vote OUT just because they don’t understand the question. And anyway, that is far too simplistic.

No, far better to employ a team of experts to devise a series of questions, a mini-manifesto if you will, to gently lead the plebs electorate to the correct conclusion.  Having made a longitudinal study of these experts – I’m an expert on experts – I've had a stab at creating an EU approved Referendum for European. Answer Yes or No to the following questions (translations provided)

1. Do you want peace on earth and goodwill to all men? (Vote Yes or we’ll send in the army.)

2. Do you want to support local farmers? (Of course you do – we’ll price out of the market anybody offering a better product cheaper. 232% Tax onChinese garlic?)

3. Do you wish for an end to starvation? (Excellent. We’ll strip the shops of all that expensive choice and set up commission-approved food banks for all.)

4. Do you believe that everybody should have equal access to jobs? (Following Greece and Spain’s excellent examples we will enslave you all forever on welfare – that’s equal.).

5. Do you think everybody should have equal pay? (We will drive out the capitalists that pay for everything and drive down wages until all are equal.)

6. Should your children get the same education opportunities as others? (We already did this – it’s called the comprehensive system, where everybody leaves equally uneducated.)

7. Do you wish Tony Blair was out of British politics? (That's easy; there will be no more 'British' politics once TB becomes EU Emperor)

8. Do you support free speech and the right to be unmolested?  (We will legislate to prevent anybody causing you offence. If that involves curtailing the use of your language, so be it – you asked for it.)

9. Do you want people to be happy? (You do? Good. Legislation for enforced jollity is on the way.)

10. Do you want democracy? (Yes? I don’t think you fully understood the question.) 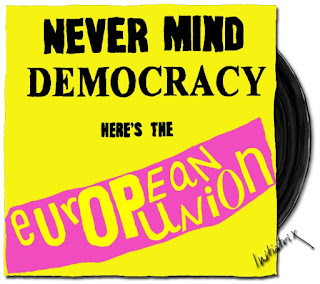 So, how did you do? Answer YES ten times and you really haven't been listening, but even a single yes would be enough to declare you IN under EU referendum rules. Listen now as the distant rumble of malcontents with vested interests grows into a roar of approval for full integration. Marvel as formerly disenchanted politicians suddenly get onside with the project. See for yourself how much money and energy will be poured into persuading you that you can't think for yourselves. Vote for slavery, vote for collectivism... or grow a set and vote for yourselves.