Much talk this past week about the nature of Capitalism.
When Labourists talk about Capitalism they endow the word with the sinister and underhand machinations of the evil right, represented in their rhetoric by thoroughly despicable Thatcherites stamping on the heads of babies and piling up the disabled into funeral pyres. Boo! Nasty Tories!
When Conservatives talk about Capitalism their words are received to a backing track of a million Marxists humming “nasssssty” with their fingers in their ears. Oh, those dastardly, undeserving rich people, with their grasping waysssss! This intelligent article by DanHannan will almost certainly be read to that soundtrack.
But see how the only audible noises are always the howls of rage puked out from the Left. Those with a right-of-centre disposition are quietly going about their business. Their business is, of course, the every day creation and distribution of the wealth which keeps our nation afloat and supports the freedoms and lifestyles of those who don’t or can’t sustain the economy*.
Now this is genuinely interesting. In so far as memetics can be understood, received wisdom is as powerful a meme as any. And the received wisdom is that those who lean to the left are cuddly and nice, while those on the right of centre are ugly, grasping, hate-filled monsters who would sell their grandparents for glue. It would seem that this ‘selfish meme’ is doing a good job of replicating itself without challenge. Maybe that’s because the ugliness is not, in fact on the right but resides with those who have the most to gain from continually stating that it is. Because people are lazy, they accept without question the widely broadcast social ‘understanding’ that left is lovely. But is it?
On the Right:
On the Left:
There are good people and bad people on both sides. But if you look at the way in which the left-wing promotes its views it has so much in common with the way far-right groups perpetuate their genuinely nasty and violent beliefs as to make all extremists almost indistinguishable from each other, yet those who call their extremism ‘left’ seem to get away with it. On the right hand side of the equation, many people are too busy keeping the country solvent to raise their voices in protest at a system which they recognise as inherently pretty fair already.
Of course I’m biased. I pay tax. So, you lefty twats, stop all this right-bashing rhetoric and deal with the world as it actually is, not as you’d like it to be in fairy la-la-land where everybody is equal, but some – as Napoleon said – are more equal than others. 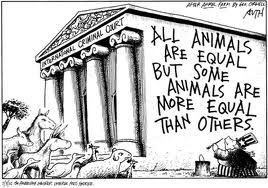 (*Isn’t it remarkable how so many who espouse the left are young, unemployed and ‘artistic free spirits’, while older lefties are almost entirely either ex militant trades unionists or else comfortably well off liberals who have never known hardship? What happens to the young who end up having to work – the majority? Oh yes, they become the so-called ‘squeezed middle’ who quietly go about their business, etc…)
Posted by Batsby at 12:47