The prisoners worked in darkness, their slight frames slick with the sweat of their labours, the sound of birdsong far away from their hearing. In the tunnel the only sounds were whispered reassurances and encouragement and harsh, rasping breath. Occasionally a deep rumble spoke of movement overhead and all work ceased, all breath was held until the danger moved away.

"Not far now Ginger, we'll get you out." The hut leader calculated that the international border was just a few miles away and although firmly in the occupied territory, the camp had been built close enough to the disputed regions for an escape attempt to have a chance of success. "Tomorrow night." 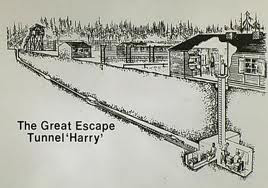 The mood in the hut was nervous as the sun slowly pushed the camp into the shadows. The guards retired to their comfortable billets while the escape squad donned stolen uniforms, checking out their papers and bundles of fake Deutsche Marks. This was it; break out, disperse and then every man for himself.

The advance had been swift and brutal. As soon as the last government had fallen and the currency failed, they had seized their chance to invade and expand the borders of Greater Germany. Since the Eurozone collapse of 2015, most of Europe had come under the control of the Fourth Reich and the English resistance was all that stood between them and the Atlantic Ocean.

"Now" The lead man broke through and the rush of cold, fresh air galvanised each man in turn to scramble for freedom. As they scattered then turned south they began their individual desperate races against time as sirens howled in the distance and searchlights scoured the earth.

Alone now, late in the February night, Ginger strode out across the land, exhilarated and terrified at the same time. He could make out a cluster of dim lights ahead and prayed that these marked the border. As he drew near the village he began to hear voices. Strange accents, but not German. Hope? A shout rang out, followed by a piercing beam of light. "Halt!"

He stopped in his tracks and suddenly the fatigue of months of internment dropped his shoulder and bent his legs. He slumped to his knees in the dirt, raised his hands and looked up at his captor, resigned to his fate. "Nationality?" the voice barked out. "English," said Ginger, too fatigued to stick to his cover. Rough hands were going through his forged papers and money. They stopped and instead pulled him to his feet.

"Welcome home, son" said the voice, "What in hell's name were you doing up there in the first place?"

Ginger felt foolish. "I only wanted to go to the Edinburgh Festival."
Posted by Batsby at 14:02