Whatever happened to spinners? You know, those spinning hub caps that were so popular for about thirty seconds way back in the early noughties? Along with tattoos, jailhouse waistlines, hoodies and dodgy accents they were an easy way to identify somebody you could righteously despise at a moment's notice.


And that's important, right? No matter who you are, it's always good to have somebody to look down on. (As low as you are, there are always Scousers) Otherwise what imperative is there to better yourself?

People are easily led; that's how the economy works. As daft an idea as you can dream up can nevertheless become the big fad of the day, create employment for a time, make a few people very rich, entice a lot more to have a punt and a few to lose a packet. But for a while everybody looks posilutely ridonculous and a jolly good laugh is had by all.

Some wacky old crazes such as pogo sticks, spring heels and clackers were mostly just a way of causing character-building injury and embarrassment to kids, which is always hilarious and valuable lessons were learned. 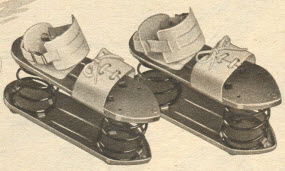 The young Batsby's ticket to the moon!
But other crazes have become a cast-iron way of identifying aberrant behaviour and mental instability. I give you Teddy Boys, Goths, Emos, Skinheads, Rockabilly, Michael Jackson and Elvis... as these stylistic juvenile crimes are retained into adulthood so they prove a reliable guide to the worth of the individuals concerned. The more people spend on making themselves 'different' the better your chances of making a correct value judgement first time. Sod diversity, it's conformity that will see us through.
So, in the United Dingdom I will encourage the continuing development and marketing of highly visible, pointless and expensive, short-term trends. It will stimulate growth, give people plenty to talk about, encourage competitive idiocy and teach people the foolishness of fashion. As each new fad emerges there will be a natural tendency for the less well adapted individuals to hang onto the old and thus provide a target-rich environment for the snipers.
I think I'm on to something.
Posted by Batsby at 21:32